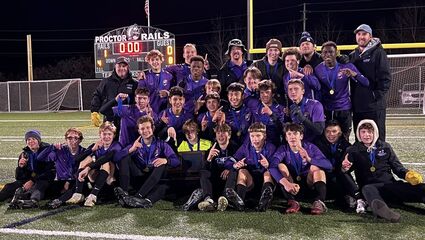 Cloquet-Esko-Carlton players and coaches celebrate winning the Section 7AA championship game Tuesday, after defeating Denfeld 1-0 on a chilly fall night in Proctor. This is the second trip to State in a row for the Lumberjacks, who also defeated Denfeld in the section championship game last year.

Believing they can win it all, members of the Cloquet-Esko-Carlton boys soccer team earned a second consecutive state berth Tuesday on the turf at Egerdahl Field in Proctor.

"After this one, if we're not No. 2, we'll be No. 3 in the state ranking," second-year head coach John Sundquist said. "We can play with anybody right now."

The Lumberjacks got their goal 32 minutes into the game from sophomore Collin Young. He controlled the ball from 40 yards out before slaloming until he beat the goalkeeper, hugging the middle, with a rip into the upper right corner.

"I'm definitely excited," Young said. "There are (four) seniors fighting for this squad, and to be able to help them get to their goal and keep going into their season ... that's definitely fun."

The Lumberjacks followed up last season's 3-2 section title victory over the Hunters by falling to Mahtomedi in the state quarterfinals, 2-1, in double overtime.

Goalie Lucas Rauner is a senior three-year starter, who once lost to Denfeld in a section final, 1-0, in 2020. In three career section final games in net against the Hunters, Rauner allowed only three goals, including Tuesday's shutout.

He credited the chemistry between himself and the back line defenders.

"There's not another group of boys I'd rather go in with," Rauner said. "This year, it's all kind of come together; we've been pretty locked down."

Assistant coach Lenny Conklin has been a stabilizing force on the team through its past playoff difficulties. He described the team's transition in going from hunter to being hunted as a section powerhouse.

"At the beginning of the year, we discussed it and we thought, 'Well, you're a state championship-caliber team,'" Conklin said.

The team is junior-heavy and received contributions from a host of sophomores too, including Brody Dushkin and Ben Schramm.

"Some of the sophomores have played huge minutes," Conklin said.

The Lumberjacks will learn seeding, opponent and site for next week's quarterfinal this weekend. The team expects to play Tuesday. 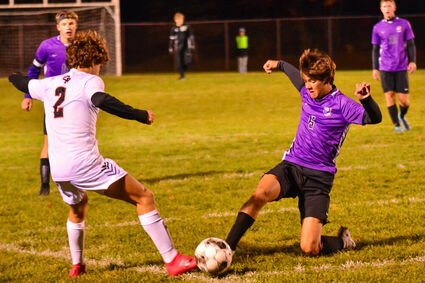 CEC junior Anders Gunelson slides in to steal the ball from Grand Rapids Rece Kuschel as the Lumberjacks and the Thunderhawks battled to advance to the championship Thursday night in Cloquet. Cloquet won.

The Pine Knot asked Sundquist, a former assistant with the team, about leading the team to back-to-back state appearances.

"The players make all the difference," the head coach said. "We just try not to lose it as coaches."

Jack Slater contributed to this report.