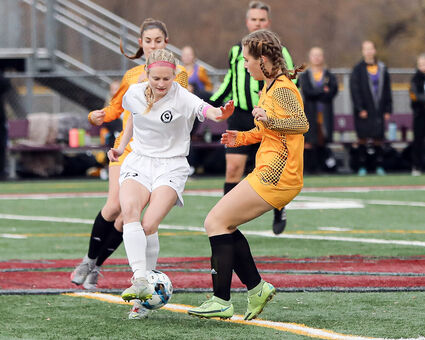 The opposing Lumberjacks leaned exactly why.

Ella Huettl had the game's only goal and the Cougars' defense did what they usually do – give up nothing – in keeping Cloquet off the scoreboard in Mankato East's 1-0 victory on a brisk night at Irondale High School.

The Lumberjacks were victim No. 20 in the Cougars' unblemished season, as third-seeded Mankato East (20-0) – in their southern school's first-ever girls soccer state tournament appearance – now heads to next week's semifinals against second-seeded Academy of Holy Angels (18-2) at U.S. Bank Stadium.

The Cougars' unprecedented season has leaned on its defense and goalkeeping, allowing just seven goals all fall. Cloquet couldn't crack Mankato East either, as Huettl's tally in the 31st minute held with a seemingly impenetrable back line and Cougars' goalkeeper Isabelle Schott, who made all five saves, when tested.

Lumberjack netminder, Katelyn Olson, was equally impressive, shoving aside 12 Mankato East attempts and keeping unseeded Cloquet (15-4-1) close throughout. Several stops by Olson were of the outstretched varsity, as the senior stayed sturdy for nearly all 80 minutes.

The goal came on a ball just outside the north end of the penalty area. Olson ran out to play it, but the shifty Huettl had a step on the rolling ball and adjusted around an aggressive Olson, toe-tapping the ball into the back of the net.

Back at the state tournament for the fourth consecutive year, Cloquet – a program with high goals – was hoping for different results, as evidenced by their teary-eyed players afterward, consoled by plenty of proud Lumberjack faithful.

It's the faith that the Cougars put in their defense – now with 16 shutouts this season – that keeps Mankato East marching, outscoring opponents a dizzying 103-7.

Still, the numbers don't lie for Cloquet either, as while seniors Olson, Macie Majerle, Alexa Snesrud, Avery Carlson and Macava Smith all graduate, 14 of the Lumberjacks' 22 players are underclassmen, only allowing one to think the girls in purple will soon be back.

Second half - No scoring.