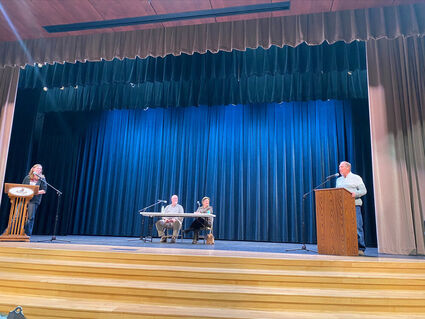 Candidates for Minnesota Senate District 11A worked overtime last week, facing off in two candidate forums in three days. Tuesday's event was sponsored by the Cloquet Chamber of Commerce, while the forum in Moose Lake on Thursday was organized by the Land Stewardship Action Fund.

In both instances, incumbent Jason Rarick, R-Pine City, and challenger Michelle Boyechko, DFL-Tamarack, established their differing viewpoints from the start.

Rarick stressed his eight years of experience at the state legislature at Tuesday's forum. A lot of people have told him they like the job he's doing, he said.

"So that is why I decided to run for one more term," he said.

"I was sitting at breakfast with my kids, having coffee and telling them I love them and I will see you after school. And inside I was like, they're gonna go and I could never see them again. And it broke me," she said, pointing out that Rarick had introduced a bill for a no-permit carry (and conceal) gun law.

On the budget surplus, Boyechko said she favored spending a lot of the money on schools, especially smaller rural schools that lack the resources of urban districts with more students. Rarick said the first thing he thinks the state should do is "make good on its commitments to counties, schools and other entities," he said, bringing up a bio-incentive program Sappi participates in. "After that, I do believe there should be some tax cuts made for Minnesotans as well."

The Chamber forum leaned a little harder on economic and general issues, while Thursday's forum in Moose Lake had a more rural flavor. Questions came from the audience as well as the two moderators on Thursday.

Barnum's Paula Williams asked about the high cost of health insurance deductibles and out-of-pocket maximums that prevent people from visiting the doctor when they need to and limit freedom by tying them to employment that includes health insurance.

"Having health insurance is not health care," Rarick said, before going on to point out that insurance is important in getting access to health care but it's not the only piece.

"I think one of the things (to make insurance more affordable) is allowing more cooperatives that allow more people to come together ... like a large corporation does," he said. "The other thing is allowing companies to go across state lines with the plans they offer, more competition will drive the cost down."

Boyechko advocated for expanding MinnesotaCare as an option for people such as farmers and small-business owners. "Instead of making more private options that are already complicated to follow ... I feel like if we can streamline the process and get more people on the same coverage you won't have to worry if your doctor is covered."

Wrenshall's John Fisher-Merritt asked how the state could encourage farmers to use more sustainable practices to preserve soil health and water quality.

Both candidates pointed to the Soil and Water Conservation districts as well as Land Stewardship and other established programs to help farmers learn new and/or best practices.

Regarding funding for rural schools in particular, the two candidates both agreed that the state's funding formula needs to be adjusted to help smaller schools survive.

Other issues showed more of a difference between the two candidates, including:

Rarick: "I absolutely support the copper-nickel mining," he said, asserting that the local people who live on the Iron Range and would work at the mine, would "make sure everything's being done properly."

Boyechko: "The more I look at it, the less I like it. They don't have a proven safety record." 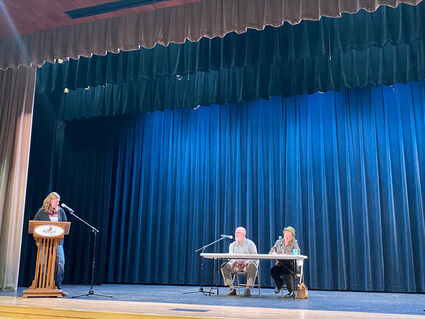 Rarick: "I'm pro-life. I believe in protecting life from conception to natural death," he said, adding that he didn't expect anything to change in Minnesota because of the court case here that protects the right to abortion.

Boyechko: "We were told that with the Supreme Court of the United States, and look where we are," she said, adding that the government does not belong in an exam room with a woman and her doctor.

One audience member asked them to say one thing they liked about their opponent.

Rarick said Boyechko is working incredibly hard on her campaign.

In turn, Boyechko said Rarick has always been respectful.

"It's not as partisan as people think it is," she said.