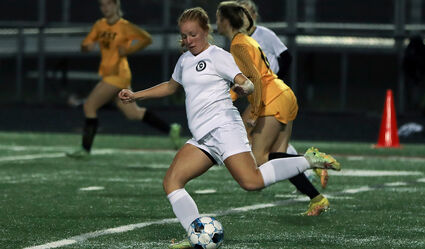 The opposing Lumberjacks found out why.

Ella Huettl had the game's only goal and the Cougars defense did what they usually do - give up nothing - in keeping Cloquet off the scoreboard in Mankato East's 1-0 victory on a brisk night at Irondale High School.

The Lumberjacks were victim No. 20 in the Cougars' unblemished season, as third-seeded Mankato East (20-0) faced second-seeded Academy of Holy Angels (18-2) at U.S. Bank Stadium in a semifinal as this edition of the Pine Knot News went to press.

Entering this week, the Cougars had carded 16 shutouts and outscored their opponents by a dizzying 96 goals.

"They have amazing numbers, quite honestly," said Cloquet head coach Dustin Randall of Mankato East. "It was pretty clear right away that they were good. They were solid all over the place."

The Cougars' unprecedented season has leaned on its defense and goalkeeping, allowing just seven goals all fall. Cloquet couldn't crack Mankato East either, as Huettl's tally in the 31st minute held with a seemingly impenetrable back line and Cougars goalkeeper Isabelle Schott, who made all five saves when tested.

"It's a defensive unit," said Mankato East head coach Elizabeth Vetter. "It takes all of our efforts to get behind the ball."

Lumberjack netminder Katelyn Olson was equally impressive, shoving aside 12 Mankato East attempts and keeping unseeded Cloquet-Carlton (15-4-1) close throughout. Several of Olson's stops were of the outstretched variety, as the senior stayed sturdy for nearly all 80 minutes.

The Cougars' point came on a ball just outside the north end of the penalty area which Olson ran out to play, but the shifty Huettl had a step on the rolling ball and adjusted around an aggressive Olson, toe-tapping the ball into the back of the net.

To her credit, rather than feeling down in the moment of high pressure, the seasoned Olson used the goal allowed as a rallying cry for her team and fuel to push the tempo. She remained cool, calm and collected throughout her final prep contest.

"I thought she played an excellent game," said Randall.

Randall, now in his 15th season, was equally pleased with how his team minimized Mankato East's scoring chances and contended with the gaudy-numbered Cougars, especially considering a youthful roster that included the most first-year varsity athletes in his tenure: 15.

"That's a whole soccer team right there," said Randall, with a laugh.

"We really had no idea where we were with so many new players," he continued. "I thought they battled. ... We felt good with the season. We felt like we competed and overachieved."

Achieving success on the pitch each fall has become as common as the leaves changing colors. The Lumberjacks have won every section title since 2019.

Back at the state tournament for the fourth consecutive year, Cloquet - a program with high goals - was hoping for different results, as evidenced by their teary-eyed players afterward, consoled by plenty of proud Lumberjack faithful.

"We knew we had to play with all we had," said senior midfielder Alexa Snesrud. "We really played our hearts out."

Olson and Snesrud wrapped their arms around each other as the pair of do-it-all seniors walked off the prep pitch one last time together, not long after classmates Macie Majerle, Avery Carlson and Macava Smith. 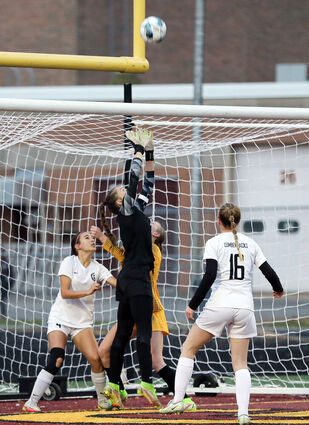 Cloquet goalkeeper Katelyn Olson makes one of her 12 saves during Thursday's Class AA quarterfinal soccer match with Mankato East. In the Lumberjacks' fourth straight trip to State, they were denied advancing after a 1-0 game.

"We wanted to win and go to the Bank; it just didn't go our way," Snesrud said. "We worked hard. We gave them a run for their money. And I'm happy going out like that."

"It was bittersweet," said Olson, who played in the state tournament every year of her four-year varsity career.

While Olson and Snesrud are two of five graduates, Cloquet sports 14 underclassmen of their 22 players, leading one to believe it won't be long before the girls in purple and white will make their state tournament return.

Olson sure thinks so.

"I feel like we have a target on our back all the way throughout the season. Teams want to beat us," said Olson of the Lumberjacks program. "We've gone to state four years in a row and I think these younger girls are going to want to hold that expectation and that name we have all created for ourselves."