It's a third at state in run for the record books

In a historic run for the Cloquet-Esko-Carlton boys soccer team, the Lumberjacks claimed third place in the Class AA Minnesota state soccer tournament on Wednesday, Nov. 2. The 'Jacks got a 3–0 win over Richfield to secure the hardware and a 2-1 record at state.

"Lucas Rauner, our goalie, got an assist on a punt," head coach John Sundquist said. "Their defender played the bounce wrong and off Elijah went."

Senior captain Erik Johnson had high expectations for the team heading into the third-place tilt.

"The goal was to make it to State again, and as the season unfolded I thought we could go all the way to the championship," he said after the semifinal loss. "In the moment, there is the feeling of disappointment. (But) we had a great season. We made it further than last year."

Now they have a third-place trophy to show for it.

After the team's semifinal loss, they decided to leave any hard feelings behind them in their hotel rooms prior to a team supper.

"Let's leave that bad energy there," Sundquist said about the team's resolve.

Then, in the third-place game: "We looked like us," Sundquist said.

Cloquet finished the season 18-3. What follows are synopses of their earlier state games:

The Lumberjacks fell 4-0 to DeLaSalle High School in a Tuesday, Nov. 1 semifinal at U.S. Bank Stadium in Minneapolis.

From the start, the 'Jacks looked nervous trying to hold back the Islanders' attack. But CEC's defense held until the 24th minute, when Islanders sophomore Marcello Villegas Rosales opened the scoring.

An off-form CEC side ended the half with some spark, but nothing to show for it.

"We started slow and had a couple mistakes that put us in a bad position early," Sundquist said. "I thought we grew into the game late in the first and started applying some pressure."

The Lumberjacks found their rhythm to start the second half, getting early chances by throwing numbers forward. But the strategy failed to unlock a goal.

In the 68th minute, the Islanders broke through again as senior Riley Blaylark added the third goal.

With seconds remaining in regulation time, senior Chris Parson scored to finalize a 4-0 victory for the Islanders, and send them to the Class AA state final.

"It comes down to them creating that first opportunity and finishing it, and we didn't," Sundquist said.

With the loss, the Lumberjacks advanced to the third-place game to face Richfield.

"I'm not sure how you rebound from a game like this," Sundquist said. "We just told the kids to let it die tonight and reset our heads."

"Getting to this point, starting only four seniors and a lot of juniors and sophomores, they have definitely put themselves on the map," Conklin said. "Between our all All-State players, a few balls today going a different way, I think we did the community and the school right."

Sundquist, a proponent of reloading versus rebuilding, had high praise for the seniors and their developing chemistry with the younger players.

"This was such a special team and a special season. The seniors played their hearts out and I couldn't be prouder," the head coach said.

In a historic win for the Cloquet-Esko-Carlton boys soccer team, the third-seeded team in Class AA beat an unseeded St. Cloud Tech, 3-1, in a tough quarterfinal match last Thursday, Oct. 27. It was the CEC boys' first state tournament win in program history.

Thursday's matchup saw early action, but a defense-heavy approach from CEC. The Lumberjacks started the scoring with a 10th-minute goal from junior Elijah Aultman. But following the goal, CEC found resistance in regaining its usual form.

"That goal early helped, but then they really pushed back and weathered the storm," CEC head coach John Sundquist said. "They took it to us for a while, a good 60 minutes."

The first-half whistle blew with CEC up 1-0, but overall play favored the Tigers. 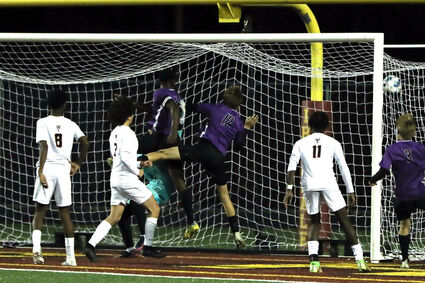 With the second half left to play, the Tigers left the 'Jacks no time to breathe. Play restarted and St. Cloud was pressing high and forcing the Lumberjacks to defend. In the 49th minute, the Tigers found their equalizer off a deflection in the box from senior Amin Yusuf.

"I know we weren't down, but it sure felt like it when they tied it up 1-1," said Sunquist. "They had all the momentum."

That was when CEC's section final hero, Collin Young, made his mark once again. In the 72nd minute, Young scored to put the 'Jacks up 2-1.

"I'm a role player, getting in there when I can," said Young, a sophomore. "I'm working as hard as I can when I'm in there."

Six minutes later, CEC senior Jordan Aultman headed the ball into the net, catapulting Lumberjacks into the semifinal. In his three-year varsity career, Aultman was an important playmaker for the 'Jacks, elevating the team's firepower along with his brother, Elijah.