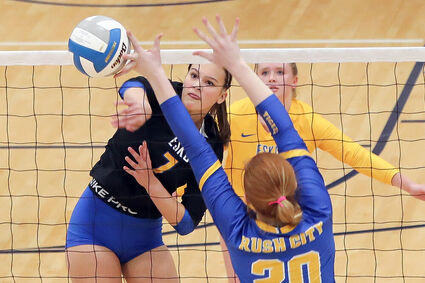 With wins over a pair of higher seeded teams in the Section 7AA volleyball tournament - and a spirited student section screaming behind them for every point - it'd be easy to call Esko a postseason Cinderella story.

"We never felt like we were the underdogs," Eskomos coach Pete Stasiuk said without hesitation.

The third-seeded Eskomos eliminated Pine City, the second seed, and Greenway, the section's defending champs, on their way to face the top-seeded Tigers, a team that hadn't been beaten since August.

That nearly changed when – after a sluggish start in the opening two sets – Esko erased the 2-0 deficit with authority. Gabby Martenson's left arm and Kyra Johnson's right rallied the Eskomos behind setter Kaitlin Lattner.

"They came alive in the third and fourth," said Rush City coach Eric Telander. "Hats off to them."

Esko led 7-6 in the deciding fifth set when the Tigers took over, scoring the last nine points, all with Cora Sayotovich at the service line, including a final-point ace to send Rush City (27-1) to its first state tournament.

"I couldn't be happier for her," Telander said of his do-it-all setter.

Johnson, finishing with 16 kills, and senior Martenson, adding 14 kills, found one another for a long hug after their final prep match together.

"I just told her I loved her," Johnson, a junior, said.

"A lot of my best friends are on this team," added Martenson, starting for Esko over the last half a decade. "I've learned and grown a lot playing with these girls. It'll definitely be something I take with me."

Martenson is planning to play the sport at the college level. She is one of a six seniors who will graduate. Had they won, it would have been a fourth state tournament appearance for Esko and first since 2011.

"They don't give up," Stasiuk said. 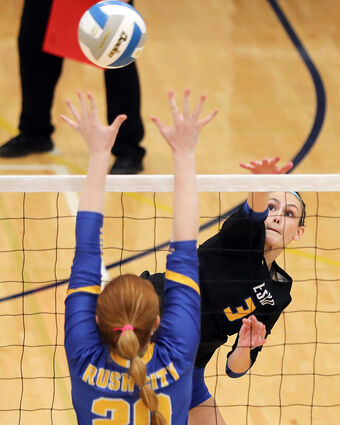 While that showed against the Tigers, it was perhaps best on display in the opening round of the 7AA playoffs when Lattner sat out an opening-set loss to Mora, battling a high fever and sinus infection, only to play and lead Esko back to a 3-1 win.

"My teammates did a great job helping me and I just wanted to do what was best for the team," said Lattner, who dished out 37 assists in her latest championship game. "That's the biggest thing I'm going to remember - our connection as a team. We had great chemistry. I've felt that before, but nothing like this year."

Esko ended the year 21-9, but the most important numbers are the ones Stasiuk, in just his second season since coming from Duluth Denfeld, has been seeing in and around the gym.

"It's building," he said. "These girls all put in the work - the club season, the summer open gyms, the weight room. We've got a lot of kids wanting to continue the success we've been having."