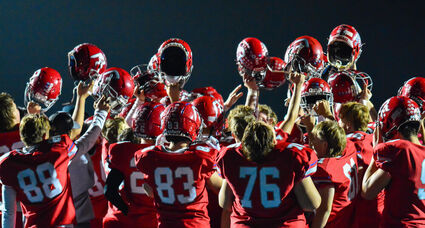 The Moose Lake/Willow River Rebels made a rally cry at halftime on their way to a 25-0 win over Crosby-Ironton in the Section 7AA championship Thursday in Esko.

In the Section 7AA championship game, that took only seconds.

Crosby-Ironton fumbled on the first play from scrimmage, ML/WR recovered, and two plays later, Jaxsyn Schmidt scored his first of three touchdowns as the Rebels' reign atop 7AA continued, shutting out the Rangers 25-0 on Thursday, Nov. 3, before about 900 fans at a drizzly Esko Stadium.

For ML/WR, it is the 16th state tournament appearance for their cooperative program's decorated history, including their fifth section crown over the last six years. The last time a team not named the Rebels won 7AA was in 2016.

"It never gets old," said Schmidt, who finished with 174 rushing yards. "Never."

It seemed as if Schmidt would never be brought down by C-I, as the 5-foot-8, 165-pound junior continually jolted up and down the field. His scores of 1, 12 and 91 yards all came in the first half.

"I just follow my blockers," said Schmidt, deflecting praise to his linemen. "They were making it easy for me."

Teammate Kaden Robbins, who finished with 80 yards on eight carries, ran for a 30-yard touchdown in the third quarter of a game which ML/WR led from start to finish, amassing 342 yards of total offense, including 295 on the ground.

"Moose just took it to us up front all night. We couldn't stop the run," C-I coach Bryan Syrstad said. "We've got to get our guys back to work because the section runs through Moose."

The Rebels (9-1) will need to establish their run game in order to beat undefeated Barnesville (10-0) in the Class AA state quarterfinal game at 7 p.m. Thursday, Nov. 10, at St. Cloud Tech High School.

The two teams met in the 2018 state quarterfinals, then a 40-0 Trojans win. To turn the tables, Louzek noted he and his program have been - along with weekly game planning - preparing for power-T, run-first Barnesville all year.

"They try to run you over," Louzek said. "Our kids have to be ready for four quarters of lots of hits and tough football. If we can play toe to toe with them, I think we've got a really good chance. If we let them run us over, it's going to be a long night." 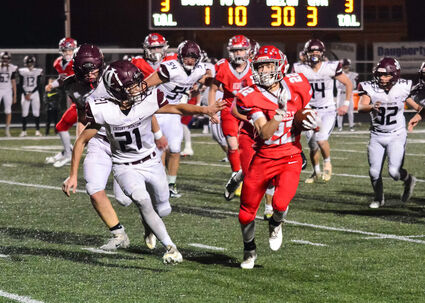 Rebels back Kaden Robbins evades Crosby-Ironton tacklers as the Rebels ran over the Rangers in the section championship.

The junior, who also plays defensive back, had an interception in the section final to help return the team to the state tournament. A year ago, ML/WR lost 14-6 to West Central Area-Ashby in the quarterfinals. The team doesn't want to experience that feeling again.

"We were not happy about our outcome last year," said the 5-foot-10, 150-pound Neumann. "We want it to be different and make it to the Bank," referring to the home of semifinal and final state games, U.S. Bank Stadium in Minneapolis.

According to Louzek, success starts up front.

"The only way you can be competitive with other state-level teams is to be physical at the line of scrimmage," Louzek said. "If you can't control the line, you're not ever going to be competitive in a state tournament game. It's our go-to every year - to build up to that physicality."

"Fast and physical," chimed Schmidt. "That's all we preach."