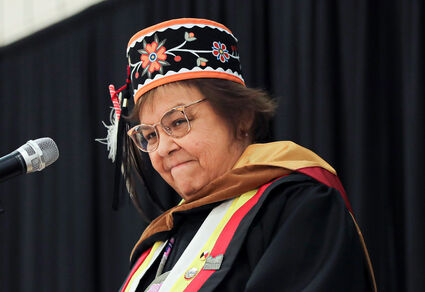 Fond du Lac Tribal and Community College president Stephanie Hammitt speaks during the graduation ceremony in May. Hammitt died this week at age 60.

Fond du Lac Tribal and Community College lost one of its strongest supporters Monday, when its president, Stephanie Hammitt, died of cancer.

Hammitt, 60, spent much of her career at the Cloquet college before officially becoming the first female president in January 2020.

At that time, more than one person - including Minnesota Commissioner of Higher Education Dennis Olson and former FDLTCC president Larry Anderson - declared Hammitt the "perfect" person to lead the nation's only combined tribal and community college.

Her term as president actually began a year and a half earlier, when she was appointed interim president after Larry Anderson retired.

Anderson talked about Hammitt's "integrity, intelligence and good heart" and that's how she led the college, always putting students first even as the college gained recognition nationally and worldwide.

During the formal appointment ceremony making her the college president, Hammitt talked about walking in two worlds, the same worlds that the college straddles: community and tribal.

"That is what we do as our work is performed here," she said. "It is even evident in our facility. We have our cultural values written in Ojibwe and English on the hallway floors, to remind us how to go about our daily work. ... Traditional always mixes with nontraditional here and I wouldn't have it any other way."

Prior to being named interim president, Hammitt had served as the vice president of finance and administration from 2016 to 2018, as chief financial officer from 2008 to 2016, and as director of fiscal operations from 1990 to 1996.

She had also served on the college's board of directors, including several years as chair.

She was no stranger to leadership as the daughter of former Fond du Lac Band Chairman Pete Defoe. 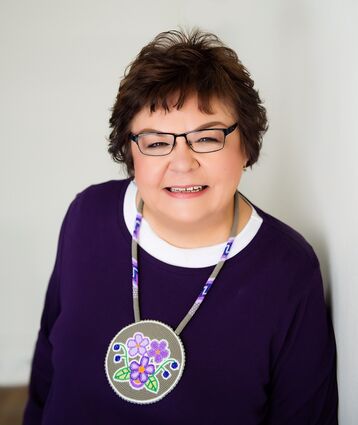 "President Hammitt loved this unique and special college," the statement read. "She was especially proud of the students at FDLTCC, along with the support and guidance provided by the staff and faculty. We are proud of the many important college accomplishments that were achieved under her leadership, and she will be missed tremendously."

A scholarship fund will be organized by the family in honor of Hammitt. Donations are encouraged in lieu of flowers.

Find the obituary with service details on Page 15 of this edition of the Pine Knot News or by clicking the photo in the article.