Diamond dominator gets his due 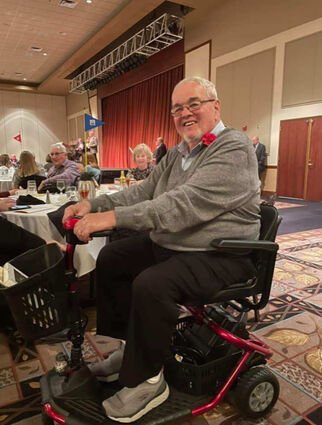 Mike Forrest was a standout athlete at Cloquet High School and continued to shine in softball after graduating. Last month, he was enshrined in the Minnesota Softball Hall of Fame at a ceremony in Hinckley. Forrest was all-state in football and basketball (leading individual scorer in the 1963 state tournament with 82 points). He was also the top hitter on the district runner-up 1963 Lumberjack baseball team with a .435 batting average.

It's the end of daylight saving time. For former Cloquet High athletic standout Mike Forrest, "turn back the clock" came a week early. Forrest was inducted into the Minnesota Softball Hall of Fame Oct. 29 with a ceremony and dinner at Grand Casino in Hinckley.

Forrest, 77, was a three-sport athlete at Cloquet High School and a household name in coffee shops in Carlton County in the early 1960s. Along with his all-state teammates Dave "Mouse" Meisner and Denny Breitbarth, Forrest will be forever linked to Cloquet's one-point loss to Marshall in the 1963 Minnesota High School Boys State Basketball championship game. Mike, who scored 29 points in the game, joked recently: "I had a chance at the end of the game. If I would have scored 31, we would have won."

Cloquet was once a fastpitch softball haven, starting in the 1950s. In the late 1950s, Cloquet softball teams won four Double A state championships in a row.

Forrest grew up near Athletic Park, where he honed his baseball skills with sandlot games with neighborhood kids including pitcher Joe Harmala. He played a couple summers of fastpitch while he was still in high school.

"When I was 15, I played midget, American Legion, and for the city baseball teams, and then softball on weekends. I had Friday nights off," Forrest said.

"It was in 1964, Mike had his greatest success playing for a new sponsor: Cloquet Wood City Motors," Huard wrote in the nomination form. "Mike hit over .300 and had double-digit home runs. In 1964, Mike's Cloquet team, comprised of all local guys, won the Minnesota AA tournament. In the regional tournament finals they defeated perennial powerhouse Whitaker Buick of St. Paul."

"The town of Cloquet raised enough money to send the guys, mostly in their early 20s, to Sunnyvale, California, for the ASA-AA National tournament," Huard wrote. "The highlight of the trip was tiny Cloquet, Minnesota, defeating a team from Baltimore, Maryland. There was no better hitter and teammate than Mike Forrest."

Huard said the team expanded its competitive schedule in 1965, and was playing nationally ranked teams in a tournament in Eau Claire, Wisconsin. After a game, Mike and some teammates were returning to their hotel and their car left the road and struck a tree.

"It was a horrific car accident that almost killed Mike and left him in a coma for 30 days," Lonnie said.

After recovery, Mike tried fastpitch the next summer but didn't have his same skill set. Instead of leaving softball, he switched to slowpitch. It was a successful transition and, in 1967, Mike led his Cloquet Bar and Lounge team to the Minnesota State Slowpitch championship.

In 1971, he moved to Blaine and challenged himself to become a state tournament-caliber umpire for 20 years.

"Mike dedicated over 30 years to the game of softball, fastpitch and slowpitch, both as a player and umpire," said Hall of Fame ceremony host Perry Coonce, executive director of the Minnesota Sports Federation, during the Oct. 29 program. "Because of his extreme talents and dedication to the game, we welcome Mike Forrest into the Minnesota Softball Hall of Fame this evening."

Joining Forrest at the ceremony were family members, Huard, and Mike's high school baseball and basketball coach, Ben Trochlil, who was instrumental in providing notice of this event and information to the Pine Knot. He was a 29-year-old coach in Cloquet's 1963 run to the basketball state tournament final.

If Cloquet ever initiates a local hall of fame, Forrest and his predecessors in the softball hall should definitely be considered for the inaugural class.

In high school, Forrest was all-state in football (his senior season, he scored 94 points and averaged 9.5 yards per carry) and basketball (leading individual scorer in the 1963 Minnesota State tourney with 82 points, 27.3 points per game). He was also the top hitter on the district runner-up 1963 Lumberjack baseball team with a .435 batting average.

He remains excited about the honor he received last month.

"I was surprised and thrilled with the state softball inauguration," he said. "I've been fortunate and thankful to have a beautiful wife, both inside and outside, a great family and many friends as supporters."