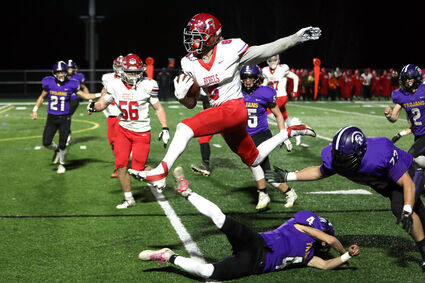 Moose Lake/Willow River's Sam Knezevich leaps over Barnesville's Zachary Bredman and past other would-be tacklers while running back an interception in Thursday's Class AA quarterfinal football game at St. Cloud Tech. The Rebels were blanked 21-0.

Third-ranked Barnesville scored on its first two drives of the game and its defense came through time after time in a 21-0 shutout of Moose Lake/Willow River in the Class AA State football quarterfinals last Thursday at a cold and windy St. Cloud Tech High School.

The Rebels opened the game with a three-and-out, and the Trojans got the ball on the ML/WR 40-yard line and marched down the field for a touchdown on a 4-yard Braeden Bredman run. Isaac Mandeval punched through the extra point to give Barnesville a 7-0 lead. Shortly after stopping the Rebels again, the Trojans used another short field and scored on an 8-yard touchdown run from John Roller. This time, ML/WR blocked the extra point.

Following the 13-0 first quarter lead for Trojans, the two teams traded defensive holds for the middle two quarters until Roller found the end zone in the fourth on the biggest offensive play of the game: a 53-yard touchdown run. A two-point conversion sealed the scoring at 21-0.

"We played well defensively, keeping us in the game," Louzek said. "Their defensive line really controlled the line of scrimmage, not allowing us the ability to run the ball at all."

After Barnesville's early defensive success, ML/WR abandoned its usually reliable ground game early for a passing attack, eventually racking up 96 yards through the air. Repeatedly, the Trojans were able to make a big stop when they needed it - no matter what was thrown at them.

The Rebels' best chance to score came early in the third quarter when senior Sam Knezevich intercepted a Zach Bredman pass. But ML/WR turned the ball over on downs inside the Barnesville five-yard line. Offensively, the Rebels were held to just six first downs on 125 yards total, 29 on the ground, well below their season averages. 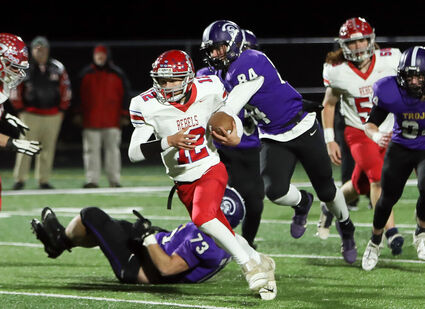 A bright spot in defeat was the return of senior captain and running back/linebacker Jackson Thompson, who missed out on most of the season after an opening-week injury at home against Hermantown. Thompson, one of 11 seniors on the roster, led the team with 40 yards receiving and eight tackles.

"Our kids played tough for four quarters, never giving up or showing any signs of quitting, which is what I am most proud of as head coach," Louzek said. "We graduate a great group of seniors off of this year's Rebel football team, but, as in all past years, that opens up the opportunity for the next group to step up and work toward another successful season and hopefully another run in the state tournament."

Moose Lake/Willow River (9-2) saw a nine-game win streak and its season end, while the Trojans improved to 11-0 and advance to Friday's Class AA football semifinal game against Jackson County Central.