Artists work in the shadows 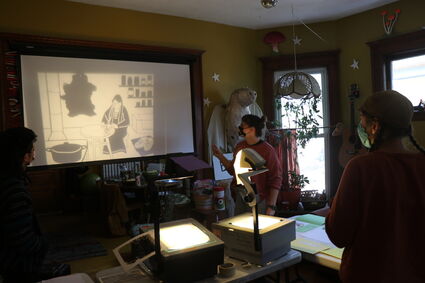 Shadow puppet designers put the finishing touches on the "Land of Stories" shadow puppet play in a Twin Cities area apartment last weekend. The puppets are very intricate two-dimensional cutouts created specifically for the play, which will debut in Cloquet on Saturday in a free performance.

When Thomlin Swan moved to a home on the Fond du Lac Reservation in early 2021, the theater artist was astounded by the lack of visible Ojibwe culture within the city of Cloquet, "despite having a reservation as part of its borders."

Swan wanted to change that.

In 2021, they received a West End Flourish grant to produce a piece of youth puppet theater that would help bring Ojibwe stories to downtown. After a slow start, things started coming together last summer when Swan connected with two local Ojibwe authors, Thomas Peacock and Sharon Doolittle Shuck, who both had written about Native American boarding schools.

The collaboration grew from there to include a number of other artists, musicians and a short film.

From 2 p.m. to 4 p.m. Saturday, Nov. 26, that vision will come to fruition in the back room of the Common Ground Coffee Bar & Deli. The free event will include flute music by well-known Ojibwe musician Laughing Fox, music by Lyz Jaakola and the Oshkii Giizhik Singers, and the premiere of artist Moira Villiard's animated short film, "Extraction," followed by Swan's "Land of Stories" shadow puppet performance.

These are not the shadow puppets of childhood camping trips, where hands and fingers become bunny rabbits and dogs in the light of a flashlight. Rather, these are elaborate two-dimensional cutouts of people and places - in some cases, entire scenes - that will be projected onto a screen while Swan, who has trained as a physical actor, also plays a role in the shadowland behind. The performance will be live.

Swan explains their role as that of producer, pulling all the different pieces together: the written stories, a movie that was already made but which fit perfectly, and the artistry of the shadow puppets created by Sam Zimmerman and others.

"We'll have anywhere from three to five people behind the screen moving puppets," Swan said, praising the "amazing pool of shadow puppetry talent" in the Twin Cities that helped create the show. "It's gonna be a bit like a film, with a lot of texture and movement."

The shadow puppet play is written to engage audience members of all ages. It weaves together two stories by Peacock and Shuck, both dealing with the boarding schools that large numbers of Native American children were forced to attend in the United States from 1879 into the 1960s. These schools existed to mold Native children to be more like the dominant white American culture. Children were taken from their families against their will; they weren't allowed to speak their native languages or practice their own religion or other customs. Many were beaten or otherwise abused. Some died.

It's a challenging subject matter, but one that needs to see the light of day, because that effort to stamp out tribal cultures still impacts the world today, Swan said, adding that both authors present their stories in a way that is appropriate for young and old.

"It was strategic to decide to still make this a show that's really for all ages," they said. "Because these stories are so important for everyone to hear and to understand."

In the play, several characters - Zhi-shay, Uncle Wolf and Oshkinawe, young Frank Doolittle - guide audience members through a dreamlike land of stories that begins with the Anishinaabe Seven Fires Prophecy and ends with a boy receiving spiritual guidance from Migizi (bald eagle) and from his ancestors on his long journey home from Indian boarding school.

"Remember son, where you came from, this land is our home, our blood. It is inside you no matter where you go."

Swan initially reached out to Villiard to design some of the puppets and other elements for the screen, only to find that she was already working on an animated movie exploring a poem by Duckwater Shoshone tribal member Tanaya Winder, which features a debut musical composition by Lucifer Josts.

"The poem is from Tanaya's perspective: she's talking to her grandma about boarding schools," said Villiard, a FDL descendant who grew up here and now lives and works as an artist in Duluth. "This seemed like a perfect space to add to that conversation ... add to a fuller picture of the topic." 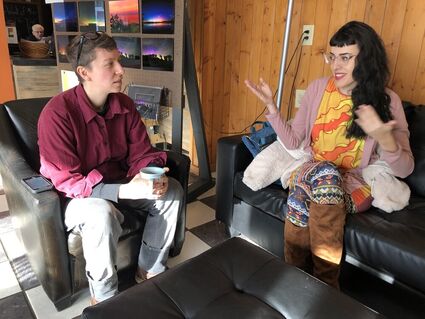 "These conversations about historic trauma can happen at any age, and with any group of people, and should be happening, really with everybody," they said.

Although tickets are free, people are asked to reserve tickets and can request transportation, accessibility, and/or child care assistance at https://landofstoriescloquet.eventbrite.com.

Those who are inspired after Saturday's performance in Cloquet may want to head to the American Indian Community Housing Organization in Duluth at 6 p.m. for a multimedia opera about indigenous writer, musician, educator and political activist Zitkála-Šá, a Dakota woman born in 1876 on the Yankton Reservation in South Dakota. Cost is $20. AICHO is located at 202 W. Second St. in Duluth