A blue ribbon day at Churchill 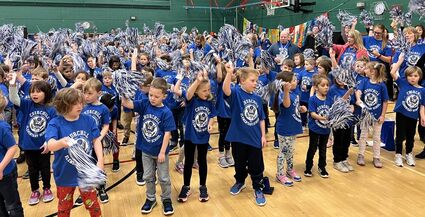 The Churchill Elementary Blue Ribbon ceremony Tuesday was a blue wave, with nearly every student and staff member wearing a special Blue Ribbon T-shirt to celebrate the school's national award for exemplary achievement in closing the education gap.

Staff and students at Churchill Elementary capped off their Blue Ribbon awards season with a party in the gymnasium, complete with drumming and a brass band, special guests, a funny heartwarming movie and hundreds of blue and white pom-poms.

The celebration began in September, when U.S. Secretary of Education Miguel Cardona announced the 2022 National Blue Ribbon schools. Churchill was one of 297 schools in the country - and only eight in Minnesota - to make the list. The Cloquet school was the only Minnesota school honored for excellence in closing the achievement gap. Closing achievement gaps between a school's student groups and all students remains an issue across Minnesota, with educational disparities evident across socioeconomic status, race, ethnicity and special education.

Minnesota Education commissioner Heather Mueller talked about the meaning of "closing the achievement gap," and how the words themselves don't mean much to children.

"They don't know what that means, but you do," she said to the staff members in the gymnasium. "You know what that means not only for today, but for every other day in the trajectory of their lives. So I want to say that it is a really big deal, which you have been able to accomplish."

"What you guys on the staff have accomplished is absolutely incredible," Dupuis said.

Then he had the children turn to the person next to them and shake hands. "Say 'Miigwech. We did this,'" he told them, and they did. 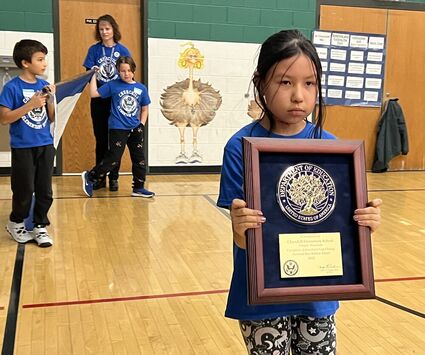 Third-grader Serenity Lone-Primeaux carries the Blue Ribbon Award around the gymnasium, followed by fourth-graders Talon Lauritsen and Cassius St. John with a new school banner, after making a grand entrance.

With comedic flair, Beadle sent video messages back to the school, sharing insight between moments of silliness (which kept the kids engaged). After a meeting with school principals and administrators that "used a lot of big words," Beadle shared two observations in a movie toward the end of Tuesday's event.

"One, so much of what they talked about is stuff we're already doing, so that made me realize we absolutely belong here," he said. "And we absolutely are one of the best schools in the nation. The other thing I got was we have a pretty darn special administrator as well," he added, referring to Wangen. "He's pretty awesome. So much of what these principals talk about are initiatives we've been doing for such a long time."