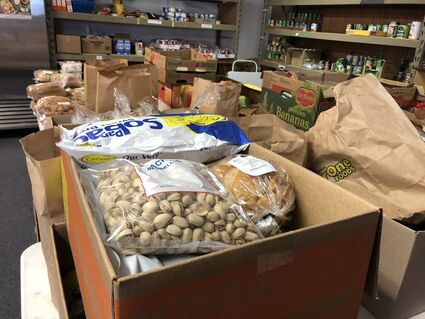 Local options: The Salvation Army food shelf is open to Carlton County residents Mondays 4:30-6 p.m. and Tuesdays 8:30 a.m.-12:30 p.m. in the back of the Salvation Army building at 316 Carlton Ave. in Cloquet. Second Harvest Mobile Food Pantry distribution is 10:30-11:30 a.m. the third Thursday of the month at Our Savior's Lutheran Church, 615 12th St. in Cloquet.

Minnesota will likely see a record number of visits to food shelves this year.

The Salvation Army is one of many organizations responding to a growing demand for food. The Northern Division of the organization serves hundreds of hot meals every day at locations across Minnesota and North Dakota. Local units also operate food shelves.

Maj. Scott Shelbourn said demand is up 15-20% over pre-pandemic levels.

"Even though a lot of people have seen an increase in salary over the last year, that's been eaten up by inflation," he said. "So when we look at the 40-year high in inflation, they may be making more money than they ever have, but because costs went up so high, it's just been absorbed. And so they're really not getting ahead at all."

Inflation hits organizations like his from both sides, said Shelbourn. There's increasing demand for services, and increasing costs to provide those services.

The reality is the same at Second Harvest Heartland, which distributes food to nearly 400 food shelves in Minnesota and western Wisconsin.

"Families are really struggling right now. We've just gotten through the hungriest summer and fall in recent memory. And families are continuing to struggle. And I think the winter poses the same challenges," said CEO Allison O'Toole.

Second Harvest Heartland reports that the number of food shelf visits so far this year is 45% higher than in the same period in 2019 and 2021.

Hunger Solutions, a Minnesota nonprofit that distributes about $1.6 million in state funding to food shelves each year, estimates one in nine Minnesotans is food insecure, uncertain where their next meal will come from.

"We don't have the final numbers yet, but we're heading towards 1.4 million more visits to food shelves this year than in the previous years," she said.

Food shelf visits in the state have topped 3 million each year for more than a decade.

Inflation is forcing more people to look for supplemental food sources, but the end of a range of federal pandemic aid programs is also contributing to the surge in food insecurity.

Second Harvest Heartland is buying 93% more food for distribution this year because of an equivalent decline in federal food commodity distribution from pandemic levels, said O'Toole.

The USDA recently announced plans to expand funding for commodity food programs by nearly $1 billion. Some of that aid is expected to reach Minnesota early next year.

But all of these nonprofit leaders expect the trend of growing demand for food assistance to continue.

Maj. Shelbourn said the Salvation Army has discussed the possibility of imposing a limit on how often people can visit food shelves in the future, and all across the region, local units are expanding their fundraising goals.

"It's not simply that more people are coming there. They're coming more often, specifically for food," he said. "And so looking at the trend, we're all expecting additional costs coming into this next year. So that's why our Christmas goals have all increased."

Colleen Moriarty with Hunger Solutions said Minnesota has one of the best food distribution networks in the country, but state funding is falling short.

"The fact of the matter is the amount of money that is distributed through the state, we have to look at that and increase it. It's not enough," said Moriarty. "We have the right system. We just need to support it."

Second Harvest Heartland's Allison O'Toole finds it frustrating to watch families and organizations like hers continue to struggle to make sure everyone has food on the table.

"You look at our community, we have a super-generous corporate sector," she said. "We have a huge ag economy here. We have enough resources to make sure everyone has enough food to put on their table. We need to make it happen."

Congress will start writing a new farm bill next year and O'Toole expects a big push by a nationwide network of organizations for more funding to address food insecurity.

Minnesota state lawmakers will also be asked to use part of the budget surplus to increase funding for food distribution.

"There's more than $10 billion sitting on the table there, and our community is struggling," said O'Toole. "We need them to focus on what families need to get by. And a big part of that is being able to put food on the table."