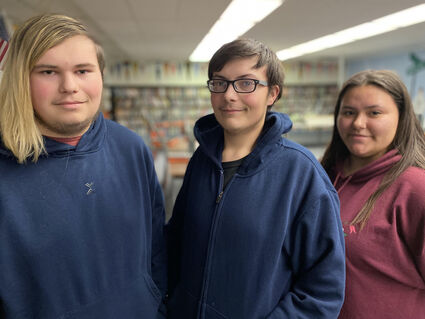 Carlton junior Elijah Kot, left, appeared with sophomores Kendal Kot and Ayeden Diver-Anderson at the Carlton school board meeting Monday to announce the arrival of the Indigenous Student Council at the school.

The Carlton school district administration and board plan to discuss an audit along with enrollment and budget at its meetings in December.

But this month, school leadership heard from one portion of the school community already representing itself impressively.

"They wanted to have a voice," he said. "Otherwise, it's invisible here."

Kot and three students - junior Elijah Kot and sophomores Kendal Kot and Ayeden Diver-Anderson - announced the organization of an Indigenous Student Council in the school.

"Essentially our council is just for recognition of every Indigenous student that is in the high school," Kendal Kot said. "So, if we have any issue regarding Indigenous students, we can have a consensus of where we agree or disagree to account for (our) side of view."

The students say the council already features more than 10 students.

"We were always talking about it, saying, 'We should start something,'" Diver-Anderson said.

The idea started as an Anishinabe Student Council, but quickly evolved because there are a number of other tribes represented within the student body.

Kevin Kot is associated with the Red Cliff Band of Lake Superior Chippewa. But as Carlton's Indian Ed coordinator, he reports to the school board at every meeting. He said this week that a day of Indigenous games at South Terrace Elementary School didn't go over as well as it could have.

"It was a good opportunity for anybody who wanted to learn more about our culture and how we do things," Kot said. "It doesn't come around much here; I would have hoped for more involvement."

He noted a "blanket exercise" coming to the high school in December, and that some Indigenous students were going to wear their regalia to school in celebration of November being Native American Heritage Month.

Kot also said the elementary school is being readied to begin a voluntary smudging routine soon on Monday mornings. The ceremony features smoldering sage with the smoke spread over and around a person in a cleansing ritual.

"We're going to teach what it's all about," Kot said.

As far as the new Indigenous Student Council goes, it's not a majority rule, sources said. Instead, the council body will aim to gain a consensus opinion and present it uniformly as issues arise that affect the Indigenous student body.

Admittedly, sources said it's a longer process. Even if one person disagrees, the body keeps talking so that everyone helps form the consensus opinion that's presented publicly.

The Pine Knot asked the students, why now?

"We have momentum," Elijah said.

"I'm involved because it's my culture," Diver-Anderson said, "and I'm supporting Indigenous people."

"This is so they have a voice," Kot said. "And so they can have a voice about Indigenous things they see and how it affects them in the school."