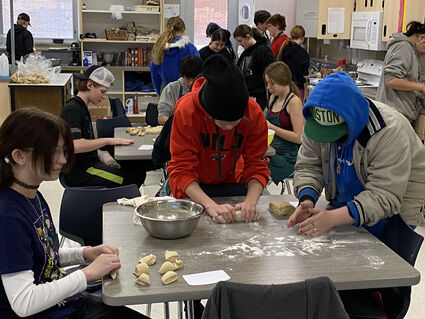 Lynsee Wanous' eighth-grade Family Consumer Science class at Cloquet Middle School was abuzz with the baking process Tuesday morning. The class took part in baking more than 700 bread rolls to be included with the DAV Thanksgiving dinner in Cloquet on Thursday.

It wasn't a normal day for students in Lynsee Wanous' classes on Tuesday.

The Cloquet Middle School teacher was engaging her seventh- and eighth-grade Family Consumer Science classes in a group project. They were baking more than 700 rolls for delivery to the annual DAV Thanksgiving dinner.

"Oh, I dropped one," said Trinity Klinger, as a plump roll tumbled to the floor.

That one was headed into the discard pile, per teacher's orders at the start of class.

"We have a few extras, so that's OK," Klinger said. "It's really nice that we're donating to people who can't [cook] or don't have enough money to buy dinner."

Wanous was in the center of it all, directing what she called "the chaos of the (cooking) lab." She demonstrated to students how to roll the dough. The dough first needed a half-hour on top of the stoves to rise, until it jiggled like Santa Claus' laughing belly.

"It's weird," Hera Arseneau said about the big clump of dough. "We don't really work with this much dough, usually, and this is different dough than we usually use, too."

"Imagine eating the dough like that!" Shine said, laughing at the prospect of ingesting the raw ingredients they were about to quarter using their scrapers.

The King Arthur Baking Co. of Vermont supplied the ingredients and delivery bags for the project. The family consumer science teacher Wanous had first accessed the program as a teacher in South St. Paul.

This was the first time she sought it and applied while teaching in Cloquet.

"The kicker is they ask you to donate half of the bread out into the community," Wanous said. "And we're donating three-quarters of it out to the DAV Thanksgiving meal."

The effort to bake 700-plus rolls included 130 students across five different baking labs with 25 to 30 students each.

Like a normal lab day, the cooking was lively but focused.

"What is awesome is they definitely are more invested, because they're giving back to their community," Wanous said of the students.

Normally, the portions the students make are smaller, and they eat the results of their kitchen labors.

"Because they're typical eighth-graders, I figured they would be fairly bummed because they weren't going to be eating a lot of the buns," Wanous said. "But I was surprised they were excited to donate most of these. There were no complaints when I said, 'You're only going to get one or two rolls.'" 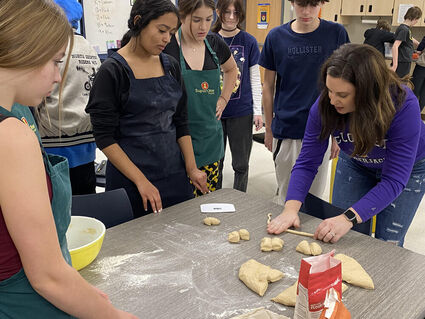 The classroom included kitchens and groups labeled by color, including pink, blue, yellow, green, orange and red. Each station was outfitted with new mixers, mixing bowls, and cookie trays.

"You will be making 32 rolls, which is 16 each onto our baking trays," Wanous announced to her class.

The rolls needed to bake in the oven for only 12 to 15 minutes.

"This is a really great group of kids," Wanous said to the paper. "And it's a fun project. I'm so glad I was able to bring it up to Cloquet."

"I'm putting them in bags for donation," Heavirland said.

"It's a fun project," added Pawielski.

When they were done, the red table featured the students' specialty rolls. Unlike the more basic dinner rolls bound for the feast, the students made theirs with cinnamon or garlic butter.

With a smile, Wanous explained, "Those are the rolls they get to have for treats in class!"