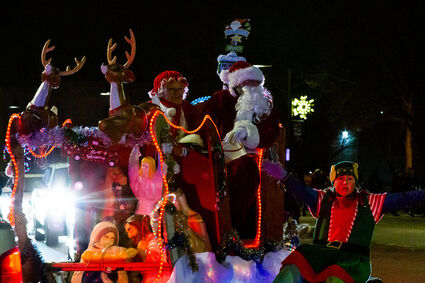 Bob and Julie Noffsinger play Santa and Mrs. Claus in the 2021 Santa's Home for the Holidays parade.

Santa's Home for the Holidays festivities have always been something that comes together thanks to the efforts of many, with many organizations each doing their part, and ending with the parade and fireworks Saturday evening.

That would have been 1996, said public works director Caleb Peterson, who looked up the plans for the street reconstruction to help put a date on the event.

Buskala said a small group of business owners decided to organize a holiday celebration to bring the people back downtown. His wife, JoAnne, Fred Little and Linda Quarnstrom traveled to a small southern Minnesota community known for its bustling winter celebration to learn what they did each year. There were other volunteers, including Harvey Benko and Keith Hansen, who had started the Cloquet Journal newspaper two years before.

"We had to make something happen," Buskala said. "The street had been completely torn up and shut down most of the summer. There wasn't electricity for the lights yet, or tar on the road, but people turned out for the parade anyway."

It was a success, and a new tradition was born in Cloquet.

In 2009, the event almost died out, but the holiday celebration was rescued thanks to the combined efforts of Robbie Thompson and Members Cooperative Credit Union, along with Renee and Al Birman of Cloquet Ford Chrysler, who stepped in as sponsors. Benko was also still on board and other volunteers stepped up to help. The parade was saved and both businesses offered family-friendly activities, along with hayrides and a community bonfire.

The names and a few events may have changed since then, but both businesses still support the annual celebration, with Wood City Motors and its new owners continuing the tradition of magic shows and cookie decorating this Saturday afternoon.

Another new tradition was born that very same year, thanks to the keen eyes and quick thinking of Bob Noffsinger. The Cloquet resident was driving near Aberdeen, South Dakota, when he spied a Santa Claus sleigh, destined for the landfill. Noffsinger said he thought immediately of the Santa's Home for the Holidays parade back home, pulled over his pickup truck and - after getting help from a loader operator - crammed the bright red sleigh into the back of his truck.

"It had been used for a Christmas train, but they made a new one," Noffsinger said. "When I came across South Dakota and Minnesota from there, people were waving and giving me high-fives."

The sleigh, and Bob and Julie Noffsinger, dressed as a certain famous couple from the North Pole, have been fixtures of the parade ever since.

This year neither of them was feeling up to it, but Bob said the sleigh could still be used as the final parade entry. Fellow veteran John Prouty and his wife, LoraLee, stepped in and will be Santa and Mrs. Claus for the night.

After 48 years of playing Santa, Prouty is thrilled to be in the Cloquet parade for the first time.

"I used to dress up for the Nifty Fifties club and go be Santa at different businesses around town on the Saturday, but they would send me home and Bones Crandall would take over for the parade," he said. "It's my turn now."

The 81-year-old isn't bothered by the idea of a winter parade. As an Honor Guard captain, he's used to being outside in all kinds of weather.

In the meantime, the sleigh got a mini-facelift this week with a fresh coat of red paint, thanks to the combined efforts of volunteer Trish King and various West End businesses, including Lyn's Auto Body, Eclipse Paint, Bridges Customs and the Pine Knot News.

"We'd love to find a group willing to really make the sleigh like new again, so it can last another 10 or 15 years," said parade co-coordinator Ivan Hohnstadt, who is also the advertising director at the Pine Knot News. "Let us know if you're interested after this weekend."

In the meantime, don't miss this year's Santa's Home for the Holidays parade at 5 p.m. Saturday, or the fireworks that follow.

Find a full schedule of Friday and Saturday events - there are quite a few - on Page 13 of this week's Pine Knot.