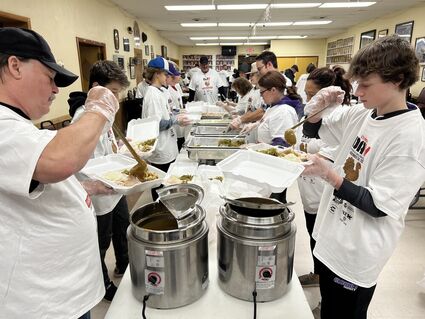 Members of the Cloquet Bantam hockey team and others form an assembly line at the Cloquet VFW. Along with other volunteers, they packaged up over 300 free Thanks- giving meals for delivery Thursday as part of the community meal organized by the Carlton County Disabled American Veterans Chapter 18. In total, the DAV served close to 700 meals on Thanksgiving Day. They managed to pull part of the day off under a power outage, just another story about overcoming the odds to serve the community.

By 10:36 a.m. Thursday, some 300 Thanksgiving meals had been delivered across Carlton County, all of them free, all of them cooked, packaged and driven to their destination by volunteers.

Then the power went out.

"Luckily the ovens at the VFW are gas, so they just kept cooking in the dark," said Raffy Johnson, noting that the lights were out for about two hours.

It was just another challenge to conquer, Johnson said. He has led the annual community meal for the past six years as a member of the Carton County Disabled American Veterans Chapter 18.

"We've had weather, Covid and now this," he said with a smile.

Between deliveries from the Cloquet VFW and sit-down and carryout meals at Zion Lutheran Church, the DAV and helpers served close to 700 meals on Thanksgiving Day. They cooked 36 turkeys, 540 pounds in total, plus giant pots of green beans, mashed potatoes, gravy and multiple trays of stuffing.

Over at Zion, regular volunteer Kris Hanson marveled at the efficiency of the massive effort.

"It's amazing my first year to now, how much things have changed," Hanson said. He comes to Cloquet from Superior every year to help fellow veteran and co-worker Raffy. "The first time there were barely enough people to make it happen. Now there are so many people. It's amazing. They've really got it figured out."

Many of the faces in the kitchen and the dining hall are the same from year to year - Gregg Berglund, George Wilton, Dianne Dahl, Jim Fernandez included - but it keeps growing. New this year was Ronnie Yellin, the head cook at Cloquet High School, who "just showed up" to help out Thursday. "I'm having a blast, so much fun," she said. "I just love the community."

Players from the Cloquet Bantam hockey team helped package the delivery meals, assembly line style, at the VFW, while other volunteers added cranberry sauce, buns and pie to each order. From there boxes and bags were filled and delivered.

The Dewey family made several deliveries after stopping in with some cards of thanks.

"When we got here they needed help, so we said 'yes,' " said Mandy Dewey, whose son plays on the hockey team. "We just keep coming back." 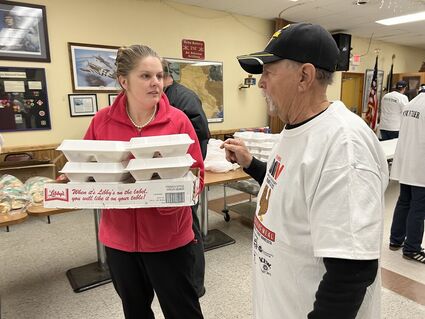 Cristy Hilton talks with DAV/VFW Sr. Vice Commander Gary Dahl while picking up meals to deliver to family members of veteran Wyatt Lemm, who has been in the hospital since October. There's a GoFundMe fundraiser for the local family.

Chris Hilton brought his 9-year-old stepson, Jack House, to Zion Thursday morning. Hilton was in the kitchen while House was putting dollops of whipped cream on rows and rows of pumpkin pie slices. Hilton said he and his wife have five kids between them, and they want to "build volunteering and giving back" into their lives, along with expressing their faith.

"It's also awesome to be with my brother and sister veterans," he said.

Many others felt the same way, veterans and non-veterans. They all came to serve.

It was a good day for all, Johnson said. He had a daughter working at Zion and a son out delivering meals.

But the work isn't done yet. The DAV and its volunteers will be cooking another community meal on Christmas Day. This one will be for sit-down or carryout meals only, but they will still need plenty of volunteers. All are invited.

"Don't be afraid to take advantage of this, whether it's for company, convenience, need, whatever," he said. "It's why we do it. If the people don't come, there's no point in doing it."