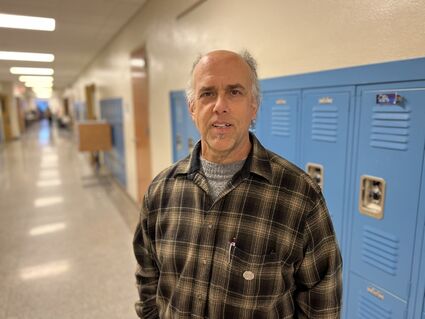 Award-winning educator Dave Perry has worked for Cloquet schools for nine years, the past three for CAAEP, the program that offers an alternative for students who might struggle in traditional education settings.

Dave Perry curled his hand in front of his face, forming a small circle.

"What I like to see is a kid with that hood, and all you see is about this much of him or her," he said. "And all of a sudden that hood comes off. It might take a week, it might take five months. But all of a sudden we see who that person is above the neckline. ... If I had a hand in that, that's awesome."

Perry was describing his work as a teacher for the Cloquet Area Alternative Education Program in a nomination video sent to the Minnesota Rural Education Association.

This fall, Perry was one of four educators across the state to receive the association's Educator of Excellence Award.

"This award honors inspiring educators who demonstrate positive impact on students, leadership in the school and community, and innovative instruction," MREA states.

Testimonials in the video supporting Perry for the award certainly evoke the spirit of the award.

Dominic Umpierre, who graduated from CAAEP this past spring, said Perry "cares about every kid in the school," and "he'll support you every step of the way."

Umpierre said Perry is simply "around" students, easily available and a constant presence.

There is a secret to Perry's sauce.

"Most of these kids who come here, they're lost in some way," the teacher said. "I like to get to know a kid on their level. I treat every student as if (they) were my favorite."

"I want Dave to know that he's probably one of the biggest reasons why I'm graduating on time this year," Umpierre said.

Perry, who teaches social studies and special education and helps coordinate the restorative practices program at the school, said helping students find their paths is a quality he has aspired to as an educator.

Perry has worked for Cloquet schools for nine years, the past three for CAAEP, the award-winning program that offers an alternative for students who might struggle in traditional education settings.

"When they meet Dave, you can see it in their eyes right away," she said. "They have trust. It's all about relationship building and Dave naturally has that gift."

Perry received his award at the annual MREA banquet last month. He thanked family and colleagues who have inspired him and helped him be a part of the support for "social, emotional learning."

He described the restorative practices portion of his work as a "game changer for students."

It's a way for students to resolve conflicts in their daily lives.

Leah Lee, a junior high and special ed teacher in the district, said restorative practices have been key in building relationships, making connections and repairing harm. She said "our behavior referrals have been cut by more than half" since the program began.

Laraine Mickelson, an outside consultant for the restorative justice program, said "students follow Dave's lead because he is real. He is honest. He walks the talk. He shows up."

Perry reflected on his current duties, saying he never thought this would be his role in education. But had he known this was where he would be in his career when starting up, "I probably would have stayed on the same path," he said.

This week, Perry was prepping to take what he's learned about restorative practices to groups statewide.

So, he's an award-winning educator who will have an impact beyond the Cloquet district. Like his humble and matter-of-fact acceptance speech last month, he simply said: "We continue with our work."

The Minnesota Rural Education Association is a grassroots organization founded in 1985 by a group of school board members and administrators who believed that school districts outside of the Twin Cities metro area needed a focused voice in the legislature in St. Paul to represent students MREA brings together teachers, administrators and school board members from across Minnesota and partners with education cooperatives, higher education, nonprofits, businesses and community members.

It offers Educator of Excellence awards to four teachers each year.

In describing the work of Educator of Excellence award winner Dave Perry and others in Cloquet, MREA had this to say, using part of the nomination essay:

At any given time, a student, teacher, parent, or staff member can call a circle. A restorative circle is a technique that builds and restores relationships through equal opportunity sharing and listening - both the offender and the offended have the same opportunity to share. When someone calls a circle, Perry's day shifts almost immediately to address the situation and ensure that everyone involved feels seen and heard.

Perry's success with restorative practices at CAAEP stems from the foundation of trust he has with his students.

Perry said he loves seeing his students drop their guard and open up in a way they haven't been able to at school before. His care for each student is evident in the way he shows up for them. Perry is a resource, a constant for his students and supports them and helps them move forward in their journey.

"MREA honors Perry for his innovation, dedication, and unwavering commitment to get results for his students