Hwy. 33 may get friendly makeover 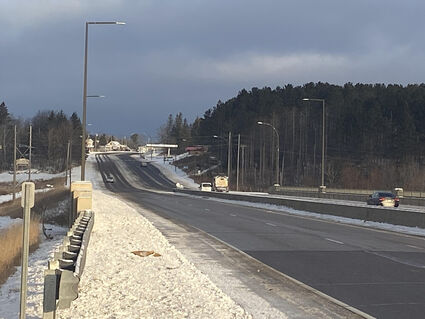 Traffic flows Wednesday morning across the Minnesota Highway 33 bridge over the St. Louis River. The future of the roadway figures to include better bike and pedestrian access and trails.

The future of the state highway bisecting Cloquet isn't expected to be as vehicle-centric as it is today.

A report due this month from Duluth-based Arrowhead Regional Development Commission and the Minnesota Department of Transportation figures to position the four-lane Minnesota Highway 33 as a more pedestrian and bicycle-safe environment, one that also accommodates greater snowmobile and ATV trail frontage alongside the highway.

"We're seeing a massive transition in transportation," said Paige Melius, senior planner for ARDC. "In the past things were overengineered for vehicle traffic, and it's tough to revert back."

Possible features for an enhanced Hwy. 33 include:

• A multi-use trail on the west side of the highway between Pinehurst Park and Super One.

• A long-sought snowmobile and ATV trail on the west side of the road leading up to the I-35 roundabout.

• Raised bicycle lanes across the highway's bridges over the St. Louis River.

• Better pedestrian infrastructure at busy intersections such as Doddridge Avenue/Big Lake Road and in front of Walmart.

Dubbed the "Cloquet Area Transportation Plan," the report will be the topic of a noon meeting, Wednesday, Dec. 7 at Cloquet City Hall, where the business community will be treated to an overview of the report and given opportunities for feedback.

Throughout November, local residents weighed in on a web survey and portal and, before that, a series of outreach events. Nearly 50 survey responses and 55 interactive map comments flowed in. Melius called it an "incredible response," and one that featured a prevailing theme.

Comments from residents articulated concerns they had about crossing the highway.

"Pine Valley with its new bike trails has become a big attraction, but it is difficult to access because of the Highway 33 crossing," one commenter said.

Another wrote: "I frequently bike over the St. Louis River. Due to debris on the bridge and the expansion joints, it is sometimes treacherous. The idea of a raised bike path on the bridges makes sense."

Enhancements would be built into future roadway projects, and the first of those are a ways off. A pair of resurfacing projects encompassing the mile from Doddridge Avenue to the bridges are scheduled between 2027 and 2033. Total cost of the work is estimated at up to $3.2 million.

Conceptual designs for future upgrades feature things such as wider, multi-use trails replacing some sidewalks, narrowed medians in places to accommodate new trail infrastructure alongside the highway, painted bike lanes, and the more nebulous "enhanced" pedestrian intersections. That could mean use of new technologies or features such as longer traffic lights. There are no pedestrian bridges over the highway currently built into the plan, as one commenter suggested.

"Based on feedback to the concepts thus far, there seems to be almost unanimous positive reception for these concepts," Melius said.

Any ATV or snowmobile trail expansions do not fall under the purview of MnDOT and are mostly outside of the design scope, meaning no MnDOT

funding is used on ATV or snowmobile trails. That work requires groups such as the Wood City Riders Club to be attentive to planning stages, and dovetail their own fundraising and planning with the state's.

"You have to be on the ball," said Chris Rokke, president for the Wood City Riders.

In conversation with the Pine Knot, Rokke presented as a bit skeptical, saying he's seen multiple, similar studies unfold in the past 20 years with fewer outcomes than proposed.

"There's no guarantee we'll get any of these," he said of proposed frontage trails.

But he's not giving up on this latest opportunity.

"We want to have a mixed-use trail on the west side of (Highway) 33 all the way from the river to the roundabout at the freeway," he said.

To that end, the club finished building a portion of trail skirting Pine Valley this summer, from Brenny-Dahl to the Members Cooperative Credit Union. Rokke said the goal for his club and others like it is to build trails where riders are already making their own way. He noted the stretch along Highway 33 leading to the interstate roundabout.

"Everybody's already using that section of trail, but it's steep and dangerous," he said, hoping grant funding will allow for creation of a flat surface along the bottom of the west ditch right of way.

The struggle when working with MnDOT is to align the club's grants with the state's funding, so that projects can unfold simultaneously. He's hoping for city involvement along with grant-funding sought by local clubs.

"If we could get a couple parties together, get $100,000 - not to build it to the standard of some engineering firm design - and build it to a functional level is the most realistic outcome," Rokke said. 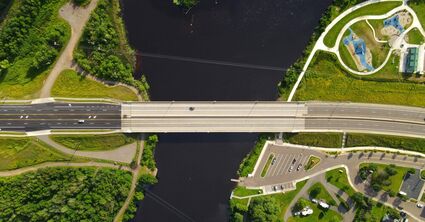 An aerial view of Highway 33 over the St. Louis River last summer. A report due this month will call for future projects to make the highway safer for bicyclists and pedestrians.

Melius called ATV and snowmobile groups some of the strongest stakeholders when it comes to enhancing Highway 33, saying they want access for all, not just themselves.

"It's very important to have their buy-in," she said. "They are community experts. They do good trail work in the community. ... They've been engaged quite regularly to ensure there is a harmonious or holistic approach to these different modalities."

Regarding pedestrian and bicycle access, Melius noted there are equity issues to consider when it comes to creating better connections at places such as Big Lake Road, leading to the Fond du Lac Reservation.

"Cloquet has a lot of existing connections for folks to get around the area really safely either walking or biking," she said. "But enhancing these connections along Highway 33, especially improving access from the west side of town to the east side of town, it's really critical."