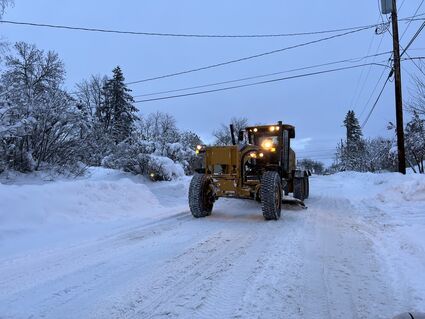 It's too soon to know just how many cumulative hours of extra work went into cleaning up and restoring power after last week's epic snowstorm, but those costs figure to be exorbitant.

To that end, a unanimous emergency declaration Monday by Carlton County commissioners will attempt to recoup state money for overtime and other associated costs for county-related work, along with the efforts of electrical cooperatives.

"Most of it is for the utility companies," said Marlyn Halvorson, Carlton County emergency management director. "Those are going to be the biggest hit."

Lake Country Power, East Central Energy and Moose Lake Power would be beneficiaries of an emergency declaration from Gov. Tim Walz, along with municipalities and townships in the county.

Minnesota Power, a for-profit enterprise, is not eligible for emergency funding. Halvorson added that residents generally are not included in storm-related emergency declarations, and would have a better chance to address damages by working through their insurers.

"Individual assistance is very, very difficult to get with a state declaration," Halvorson said, adding a federal emergency declaration was also out of the question.

The city of Cloquet will total its expenses at the conclusion of its pay period and make an overall submission with the county, said Caleb Peterson, director of public works. Other townships and municipalities within the county will follow suit.

Peterson said it was the type of early-season event that will "impact our operations well into spring."

"We don't know exactly how many hours were worked yet," Peterson added. "But I can say the full crew was coming in at 3 a.m., and staying late from the start of the event through the weekend."

"To plow the roads a lot of times we had to clear the trees first," said Rick Norrgard, assistant transportation engineer for Carlton County.

Norrgard described plow operators remaining in their trucks while it was "all hands on deck" for maintenance crews clearing fallen debris.

"It was a little disheartening when we got the roads clear, and then we'd come back with another 10 or 12 inches of snow," Norrgard said. "It's tough to start all over again."

Both he and Peterson praised local cleanup efforts, citing bare blacktop on county roads and mounds of snow cleared from city streets by Monday.

The threshold for the county to meet emergency damages is $74,224. Should Walz approve the emergency declaration, the state will cover 75 percent of costs associated with storm cleanup.

"On average, it takes at least a month to have an accurate total cost from these types of storms," said Derek Howe, chief operating officer for Lake Country Power.

Several factors go into determining the cost from each storm, Howe added, such as overtime labor costs for crews, contractors and mutual aid cooperatives, as well as equipment use of items such as bucket trucks, digger trucks, pickups, track loaders and skid steers, snowmobiles, and even amphibious vehicles.

"We also have material costs to determine, such as fuses, broken poles, transformers, lines and other materials it takes to make the power flow," Howe said.

Power cooperatives and governmental agencies won't know if they're approved until all costs are accounted for. Neighboring counties were also making emergency declarations.

"Since Lake Country Power is not-for-profit, this helps alleviate us from having to recover these costs through higher rates when large storms happen," Howe added.

For Carlton County, additional costs arose with the creation of temporary warming shelters, including Moose Lake Community School and Our Savior's Lutheran Church in Cloquet.

"There were county workers in public health working really closely (with others) to set up warming shelters," Halvorson said, citing the use of American Red Cross volunteers.

Halverson said there is no cap on the amount of damages the governments and electrical cooperatives can submit.

County commissioners in Cloquet on Monday seemed to believe meeting the emergency standard would not be hard, considering the ferocity of the storm and its widespread impacts.

"That's easy to meet," board chair Gary Peterson said. "They came from Mankato to fix my road. ... our workers had to go out and cut trees out of the way before they could plow."

"Normal, regular hours can't be covered," Halvorson said. "But any overtime is eligible to be recouped."