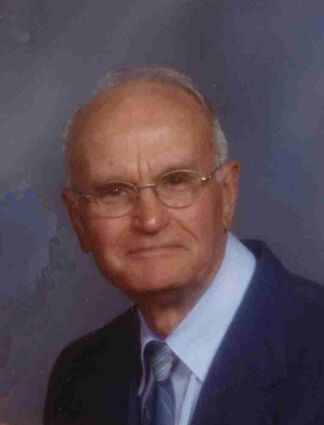 George E. Hughes, age 96, passed away Friday, December 23, 2022, at New Perspective in Cloquet. He was born January 24, 1926, in Crow Wing, MN, the son of Loren and Ellen (Kile) Hughes. George resided in the Cloquet area since 1950 and worked for the Conwed Corp. and was a member of the Conwed 25 Year Club. He was a former member of the Solway Township Volunteer Fire Dept. and Hope Lutheran Church in Munger where he served as a trustee for many years. George enjoyed square-dancing, old-time dancing, deer hunting, fishing, gardening and was a great handyman. He especially loved spending time with his grandchildren, great-grandchildren, and great-great-grandchildren.

George was preceded in death by his parents; his wife, Jessie; daughter, Brenda Kacer; and an infant son Adam; and his siblings, Margaret, Suzie, Dale, Jackie, and Fran. He is survived by his children Sharon (Wayne Laakso) Hughes, George (Yvonne "Bonnie") Hughes, and Gary Hughes; brother, David Hughes; sister, Judy Stiner; grandchildren, Christine, Michelle, Matt, Amanda, Josh, Kelli, Pete, Nicole, Tim, and Daneil; 17 great-grandchildren; 4 great-great grandchildren; and numerous nieces and nephews. The family would like to express their thanks and gratitude to St. Croix Hospice and the staff at New Perspective for the wonderful care given to George.

Visitation will be Monday, January 2, 2023, from 9:00 a.m. until the 10:00 a.m. Funeral Service at St. Matthew's Lutheran Church in Esko, followed with a luncheon in the Family Life Center at the church. Spring burial will be in Solway Township Cemetery. Arrangements are entrusted to Nelson Funeral Care of Cloquet.