With plenty of snow, it's a go for skiers 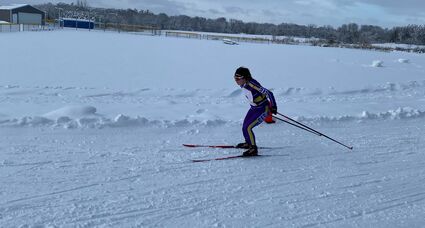 Charlotte Ripp helped the CEC Nordic girls team place third at the Mora meet (above) and fourth at Grand Rapids before the holiday break. Both CEC teams will host races Tuesday at Pine Valley.

Oddly enough, the Lumberjacks' first Nordic ski meet was canceled because of too much snow, not too little, the usual reason early in the season.

Despite that hiccup, the Cloquet-Esko-Carlton teams competed in two meets entering the Christmas break, and are looking forward to hosting the third meet Tuesday, Jan. 3 at Pine Valley.

"That one is unique because it takes place in the dark, since our entire trail is lighted," said head coach Tim Stark. "Parents don't have to take off work, so there tends to be a lot of spectators for our team and others."

Stark expects 10 to 12 teams, roughly 300 skiers in grades 7-12, to compete. Some 50 of those skiers will be Lumberjacks. The new head coach said the trails are ready, although skiing was canceled for a few days after the winter storm that left the trails covered with broken branches, downed trees and even more trees bending over the trails from the weight of the snow.

Still, the weather has been mostly good for skiing this season.

"We got enough snow early so we could ski," he said. "The storm really did a number on Pine Valley but now things are good and, fingers crossed, should be good through the end of the season."

Although this is Stark's first year as head coach, he's not new to the team or the sport. He was an assistant coach under Arne Maijala the past four years, and before that he was head coach at Duluth Denfeld. A varsity skier in high school at White Bear Lake, Stark has been doing his own "citizen races" since then, including the American Birkebeiner in Hayward. The new head coach is touted as a "skier's coach," and could often be found teaching technique out on the trails in past years.

"I liked being an assistant because of everything else I have going on in my life (he has two kids ages 3 and 5), but I enjoy being able to set the direction for the team," he said.

He expects good performances from both the boys and girls varsity teams, who should have the home course advantage. He's seen strong performances so far this season from Miles Fischer on the boys team and three seniors on the girls team: Jazlyn Gunderson, Charlotte Ripp and Megan Chopski.

The girls team placed third at the Mora meet and fourth at Grand Rapids before break, while the boys team took fourth in both meets.

Stark hopes the future will include building the team numbers back up toward past highs of nearly 100 skiers. He praised his two assistant coaches, Ann Gustafson and Anneliese Braaten, who both teach sixth-grade at the middle school. 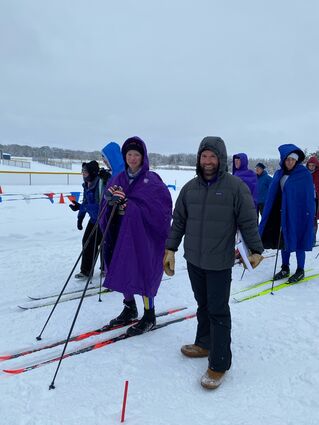 Tim Stark is in his first year as the head CEC Nordic skiing coach. After being assistant for the last four years, he will work with established racers like Miles Fisher, left.

"I think we can build it back up," he said. "There are a lot of kids coming up through Cloquet Kids Ski right now."

Another half dozen volunteers regularly show up to work with the younger kids on the team, he said. Some are community members, others are former high school skiers. Stark said it's really rewarding to see previous ski team members out on the trails.

"It's something I hope my athletes stick with and realize they can carry forth for decades, whether they're skiing recreationally at Pine Valley or continuing to compete," he said. "I've run into a handful of skiers over the past couple weeks. It's special to see."

Anyone is welcome to come watch the home meet starting at 4 p.m. Tuesday. Concessions, including hot drinks, will be available for purchase in the chalet.