One last battle for the jug 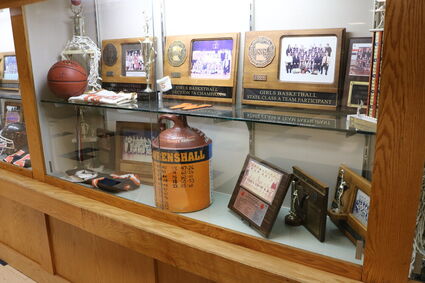 A chapter in the history of two small-town basketball programs will draw to a close next week. But when it comes to the annual "Jug" games between the boys and girls teams at Carlton and Wrenshall, the question that arises is to what extent the history of the games has even been written.

There are few definitives when it comes to the origin of a jug being the centerpiece of rivalries that go back generations. Those facts come from the jugs themselves, which have written on them the past scores and years of the games that saw the jug exchange hands.

The boys jug dates back to 1951. The girls jug has 1980 showing as the first time the Wrens and Bulldogs scrapped for the jug, but is missing many years due to wear.

On Monday and Tuesday, the jug game era will end as the schools combine in all sports this spring. The girls will clash in Carlton on Monday and the boys in Wrenshall on Tuesday.

Where the games are played is important, because the jug can only be taken when on the opposition's court. The Carlton girls and the Wrenshall boys currently hold the jugs.

The boys jug has likely seen a paint job and rewriting of the scores since 1951. On the top it includes the names of the winning coaches. One that sticks out, although it is misspelled, is Vinji. Jack Vinje was the coach of the Carlton boys from 1950 to 1958. He likely came up with the idea for a symbolic jug to mark a rivalry that players across generations have found to be odd, because they know the opposing team members well. Many were friends or became friends after their high school playing days.

Rob Hyry played for Wrenshall when it had a run of jug wins in the 1990s.

"We were all friends," he said of players from both sides. "Except for those two hours every year."

And there is a host of former players who ended up coaching on either side of the rivalry over the years.

Was Vinje trying to light a fire under what he may have found to be a too cozy rivalry? His son, John Vinje, said it was in his dad's nature to come up with such an idea. He was in sixth grade when his family left Carlton, but he remembers well the games for the jug.

The coach at Wrenshall at the time was Jack Boyer, and it isn't known if the two Jacks schemed on the jug idea.

John Vinje said future Duluth coaching legend Frank Napoli was hired as Wrenshall coach after Boyer. Napoli blocked for halfback Jack Vinje at the state college in Bemidji. John Vinje surmised that the two highly competitive college athletes would have certainly been keen on adding a little juice to the smalltown rivalry.

A few years ago, when reminiscing with the Pine Knot about the magical 1959 Carlton team that took second in the state tournament, Doug Anderson admitted that the real prize for Bulldogs back then was taking out Cloquet, which the 1959 team did in an upset that year.

But the jug was still "highly coveted," Anderson said.

Some say the jug came about because it was left by a visiting team. Hyry recalled hearing that it was Wrenshall which left the water jug and called Carlton to get it back.

"Carlton said, 'You can beat us for it.' That's what I've always heard," Hyry said.

If that story sounds familiar, you'll recall that the college football teams from Minnesota and Michigan play for the Little Brown Jug with a background story exactly like the one that has floated around Wrenshall and Carlton all these years.

So the origin mystery remains.

Memories remain as well. A host of former players from across generations talked about what a big deal it was to fight for the jug. And in the same breath they talk about slapping the opponent on the back and going about the business of being friendly with each other.

Players on both sides were related, worked together, had classes together, dated people from the other town.

"The district line didn't mean anything," said Julianne Emerson. "We were all friends."

She's a Carlton school board member and former athlete at the school. Her father, Bob, coached girls basketball teams across four decades.

"We never thought of it as a rivalry," Emerson said. "That was Esko."

Spencer Rousseau is definitely part of jug game legend. He hit a half-court shot at the buzzer in 2019 that crushed Wrenshall, which had won the jug the year before.

Now a student at the University of North Dakota, Rousseau said the shot remains etched in his brain. He verbally marches through the mechanics of the 4 seconds the Bulldogs had to get him to his shot.

He has family members in both school districts, so the jug gets brought up at gatherings.

"That's what gets talked about," Rousseau said.

And people will talk forever about the impossible shot he made.

"Playing Wrenshall is like playing your brother," Rousseau said. "It's a friendly rivalry, but you'd do anything to beat them."

Wrenshall girls basketball coach Emma Grover is trying to instill some rivalry passion in her team this week. She was part of the 2008 Wrens team that went to the state tournament.

"My mission is to urge them to experience what we've experienced," she said.

She knows the aura around the jug can be lost on teenagers, especially today with more options outside of sports for students.

"They should know what it means," Grover said. "The last jug game. If we get it, it gets to stay here forever."

Grover and her teammates collected a lot of hardware, shown in a picture embedded in a state tournament plaque just above the boys jug in the Wrenshall trophy case.

Right in the middle is the girls jug the team won that year.

"It looked a bit different," Grover said of the enthusiasm around the game. "The gym was packed. Our program hasn't been as strong since 2008, but I'd like to give (my team) a slice of what it was like. To light that fire."

Carter Woodhall said he gets it. He was shooting baskets in the Wrenshall gym earlier this week.

"It's intensity," Woodhall said of the game Tuesday. "We all know each other, we all talk to each other on the court. It's the biggest game of the year."

Wrenshall principal Michelle Blanchard, like many who are more than a few decades away from high school days, wracked her brain for top memories playing for the Wrens in the late 1980s.

"I remember my coach saying, 'No outside shots,'" she said. "I didn't listen. It helped us win."

The Wrens got the jug and Blanchard, then Michelle Hamilton, scored 26 points.

"Internally, you were psyched for it," Blanchard said of the annual game. "Then you win and sort of put it away. We were all friends."

Blanchard, like many players today, is not lamenting the loss of jug games as much as she is looking forward to strengthened combined programs when the districts go all-Raptors later this school year.

Low participation numbers and more choices have left the Wrenshall girls program down for many years. She hopes to see a rekindling of competitive spirit.

"It was time," Blanchard said of the merger. "Let's just do this."

Shawn Filipiak coaches the Carlton boys team that got the best of Wrenshall on the Bulldogs court in the first game of the year. Filipiak hopes his team is past some of the first-game jitters and ready for what will be an intense game.

He's letting his players take their own approach to the game. He knows they will be amped up. Are the Bulldogs overconfident because of the earlier win?

Anyone who knows the history as it's written on the jugs, knows many of the games are close - no matter what shape the programs are in. The intensity evens things out, he said.

After Tuesday, the jug games will move on from the realm of living history. 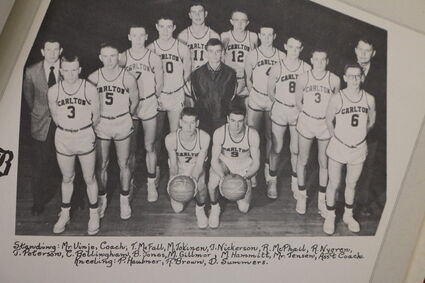 The battle for bragging rights and a symbolic jug in basketball between Carlton and Wrenshall dates back to 1951. Carlton coach Jack Vinje, at far left in this yearbook photo of the 1951-52 team, is rumored to have hatched the idea of a jug to go to the winner of the annual rivalry game. There are other theories.

Audrey Cavanaugh, a Wrenshall student in the 1960s, said she once wrote a history of the jug game. She said she talked to many people who played in some of the first games in the 1950s and riffed on the jug origin.

"It was a joke between coaches," she said.

Her memory doesn't have details, she said.

Legend has it, part of her historical account was rolled up and placed inside the boys jug. It was either eaten by a mouse or simply crumbled and was lost.

Cavanaugh laughed. Then recalled that she placed her historical papers in a typewriter paper box and left it at the school.

"It must be there with the old stuff," she said. "Who knows."

This story isn't over. If you have memories or information about the jug game tradition, drop the Pine Knot News a line at [email protected], with "Jug" in the subject line.