Wandering dog gets a home 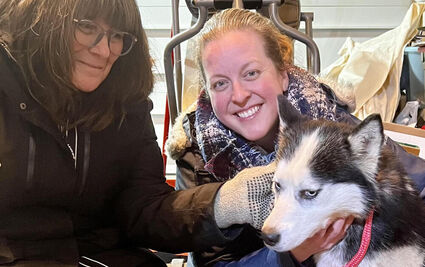 Jen Cadigan, left, of the nonprofit group The Retrievers, smiles alongside vet tech Jodi Carlson and a Siberian husky on the day it was rescued, Dec. 26.

A lost or abandoned Siberian husky spotted by numerous people in Scanlon throughout December finally has a new home.

The stray dog was trapped and rescued Dec. 26 by volunteers, and now resides in a temporary foster home for huskies in the Twin Cities area.

The dog, first dubbed "Pete" for the way it was spotted around Trapper Pete's Steakhouse and Saloon, then "Petey" once her gender was discovered, has now been given the name Violet.

"I felt bad for her," said Cindy Peterson, owner of Trapper Pete's. "She kept running across Highway 45, and I thought she was going to get hit."

Last week, the Pine Knot spoke with Jodi Carlson, a veterinary technician and administrator of the Facebook site Missing Pets in the Northland, about the five-day rescue operation.

Carlson had started a side job as a server at Trapper Pete's, where she first saw the dog early last month.

"I just started working here," Carlson said. "I'm a vet tech, I'm admin for Missing Pets in the Northland, and I can't sit here and watch this dog run around."

Even before she started efforts to rescue the dog, it had appeared in a "sighting" post on the Facebook page.

Social media interest in the animal surged throughout December, with thousands of likes and hundreds of comments to posts featuring the dog.

"Almost 30,000 people have heard the story," Carlson said, citing Facebook metrics. "People were very happy to see she was safe."

Carlson was first alerted to the dog Dec. 9. Friends traveling overnight to the airport had stopped at Kwik Trip and noticed the dog running around.

Carlson estimates the dog to be a year-and-a-half old. She was wandering the Minnesota Highway 45 corridor for roughly four weeks, with sightings as far away as the Sappi paper mill. Carlson figured the dog was using the railroad tracks to get back and forth, while bedding beneath a white pine near Trapper Pete's.

She had burrs and sticks in her coat, and was beginning to lose weight as she fought through the coldest days of the winter to date, with temperatures below zero in the days leading up to her capture.

"Multiple times people were like, 'I tried catching it; I called out to it,'" Carlson said. "But she was in survival mode and was not going to come to you, no matter if you had a cheeseburger in your hand. That's why we had to put the trap up."

Carlson solicited help from one of her site administrators, Jen Cadigan, who is also a caseworker for the Twin Cities-based animal rescue group The Retrievers, which dedicates itself to finding lost dogs using humane traps.

In the days before the dog's trapping, Carlson, with the help of Trapper Pete's staff, began feeding the animal day and night with what Carlson termed "high-reward treats." Prime rib, rotisserie chicken and boiled hamburger with Worcestershire sauce were all heated and presented behind the restaurant alongside a dog house placed there for the animal.

The first night Carlson put out food, the dog popped its head up from beneath the white pine 40 yards away. She was curious, but skittish. In the five days of feedings leading up to her trapping, she'd eat only early in the morning before the restaurant opened and late at night after the restaurant had closed.

It's unclear how the husky came to be a stray. She was not implanted with a microchip.

"Huskies are very well-known to be huge runners," Carlson said, speculating that the dog could have hit the train tracks and got lost on its own, or, more likely, the dog was abandoned at one of the filling stations in the neighborhood.

When dogs get lost, they circle back to the last spot they saw their owner, Carlson explained. "Whoever had her last was around this area," Carlson said. "I guarantee it."

Nearby apartment residents didn't know who the dog belonged to, and, in one harrowing episode, the Cloquet police contacted Missing Pets in the Northland to say the dog had almost been "smoked by an ambulance."

"She probably would have gotten hit by a car or starved," Carlson said, when asked what the dog's fate would have been without intervention.

Since Carlton County lost its animal shelter several years ago, the volunteers at Missing Pets in the Northland have served as de facto animal control for the area. The sightings posted on their site yield successful results a majority of the time, Carlson said.

Carlson, who lives in Cloquet, works at the Duluth Veterinary Hospital and often fosters stray cats, getting them medical care before they're placed for adoption.

"It's a passion I have," Carlson said. "Being a vet tech, it's in my blood. There's nobody that can help strays in this area like we can."

The site's volunteers prefer to make connections between pet owners and those who locate lost pets. It's a special case when they have to hand-catch or trap a dog, Carlson said.

On the night the husky was secured, Carlson and Cadigan spent three hours assembling the trap, then staked out the trap from Trapper Pete's parking lot. Sometimes it can take a dog days to follow the food trail into the wire cage. But within a couple hours of setting the trap, the dog wandered in, triggering sensors that released a magnet causing the door to close late in the evening on Dec. 26.

"She was so food-motivated, it was easy," Carlson said.

Once captured, the dog spent a night at a husky foster home in Sturgeon Lake, before moving on to another foster home farther south, where she was given the name Violet. She's currently in the middle of a closely watched two-week shutdown. 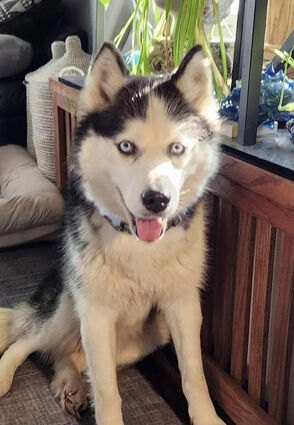 "They're a super-high flight risk after they've been caught," Carlson said. "They need to decompress for a couple of weeks at a foster home well-versed in husky behavior."

Carlson guessed it would be a couple months before the dog is adopted, but said there was no obvious reason she couldn't live a good life from here on out.

In the meantime, Trapper Pete's has dedicated a special menu item in honor of the dog. Dubbed "The Petey," the special is a nod to the meals that lured the dog to safety: an open-face prime rib sandwich.

"She's gorgeous," said the restaurant owner, Peterson, while viewing a picture of the dog inside her temporary home. "She looks happy and way more relaxed."