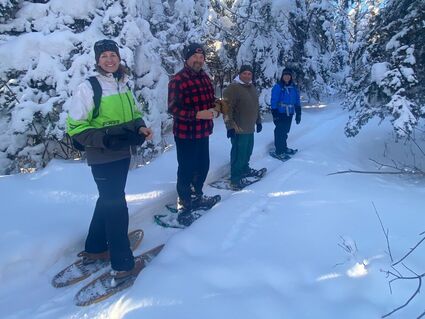 This year's snow total has made for some particularly interesting challenges for Tom Marciniak's snowshoe trails north of Cloquet. Blazing the trails are Lori Nelson, Kerry Kolodge, and Tom and Diane Woodward.

For over 60 years, he has made me and many other Carlton County residents laugh. His name is Tom Marciniak, although "Maynard" has been his informal handle since childhood. All Scanlon kids had nicknames: Bird, Heinz, Singy, Mugger, Hawk, Wennie, Jase, Speedy, Kraut, Baz, and the list goes on.

Tom grew up in Scanlon and he's very proud of that - just ask him. Sather Park was his home away from home. Any place where there was a ball or puck in Scanlon in the 1960s or '70s, Tom was likely nearby. He led the Little League Scanlon Yankees to multiple championship titles. Tom was, and remains, a talented athlete.

Maynard could have probably played any high school sport for the Lumberjacks other than being a hurdler or sprinter on the track team or a swimmer or diver (lead feet).

As a middle school kid, he decided to build a homemade football field goal post in his backyard. He spent hours practicing, but not on windy days due to shaky goal posts. In a few years, he became a fine Lumberjacks placekicker. A tremendous infielder, he was a steady third baseman for Cloquet's 1976 state tournament baseball team under coach Jerry Erickson. Maynard always said he was surprised Erickson never gave him the base-stealing "go" sign.

Tom was a good skater and played a lot of pickup hockey games at Sather and Athletic parks. He was also a top basketball H-O-R-S-E player in town, taking on all challengers, especially on his home basket. Maynard worked on an improbable blind shot over the corner of his garage, and perfected it. It couldn't be repeated once he made it. He usually won the basketball challenges. He was a happy-go-lucky kid always searching for ways to make others laugh.

After high school, he tried his hand playing in Cloquet and Duluth's adult sports leagues. Was he successful? You be the judge.

It was around this era that videocassette cameras became available and popular. This was a perfect calling card for Marciniak, whom some refer to as the Steven Spielberg of Cloquet. He was the self-acclaimed leading actor, producer, writer and director. Topics included water- and snow-skiing fun, baby shower parties, team recaps ... all meant for poking friendly fun and laughter. Some call him a home-movie genius.

Before moving to downtown Duluth, the popular Bentleyville winter attraction was situated north of Cloquet next door to Maynard's home. The sponsors needed a Santa Claus and help putting up the lights and decorations. Now, who is more jolly than Maynard? He played the role of St. Nick for many years, making children happy.

Tom is retired now, having had a successful career at Cloquet's Sappi paper mill. Not sure he did it for real, but he had movies that were "supposedly" of him taking a kayak to work via the St. Louis River. I'm sure he made a lasting impression on other mill employees.

To this day, Tom is an avid hiker, snowshoer and biker. He can often be seen at Cloquet's Pine Valley recreational area with friends working up a sweat year-round. The cross country ski trails are named in honor of his brother, Mike, a longtime Cloquet coach and national competitor.

Now, even the most cheerful can't escape the reality of serious medical issues. Tom has had his share and has been, at times, a regular at the Mayo Clinic.

Thank goodness he has a supportive wife and family and friends all cheering for him. Cloquet needs his smiles and good nature.