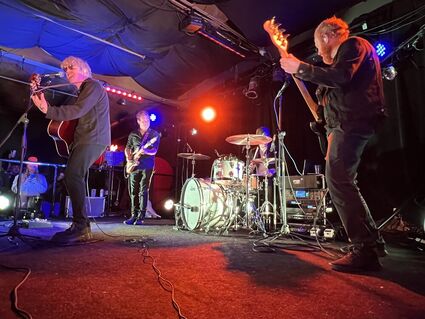 The Social Animals performed Dec. 30 at the Rex in Duluth. The band members are spreading in many directions this year. Cloquet native Tony Petersen, center, is touting a solo album.

Talking from his northeast Minneapolis residence, Tony Petersen described the home studio he named Double Pug after his dogs Patti and Doug.

There are powerful microphones and compressors, good sound baffling, and windows facing his backyard to the west.

"It's a really powerful one-man studio," Petersen said. "Generally, the music happens between 7 p.m. and 3 a.m., so I get to catch the sunset."

"That's still the most exciting project in my life, and it's not going anywhere," Petersen said.

But while Clark conducts a solo tour featuring Social Animals material through the western United States in February and March, Petersen will be found closer to home, gigging in support of his latest release, "Luck," under the solo moniker he's made for himself - Ditchbird.

Recorded mostly alone in his home studio, "Luck" was released earlier this month and is available for listening on Spotify, iTunes, and Amazon.

In promotional material supporting the record, Petersen described the 30-minute, eight-song recording as his "most stripped-down set of songs yet," and "the closest I have come to baring the truest sense of my artistic self."

It's loaded with banjo, and songs Petersen can pack and play anywhere. But it is not banjo "Nebraska" - Petersen's favorite Springsteen record. Many of the songs are driven by Petersen's flourishes as a string virtuoso. Some songs are instantly catchy, and others, like "Arms Length Away," offer the musician a chance to showcase his balladeering and lyrical heft.

"I was hoping that would be one of those sleeper tracks you find after you've gotten hooked at the beginning," Petersen said. "Toward the end, you chill out a little bit."

Petersen said he's always been most comfortable with being a side man, one capable of stepping out front for a guitar solo, before fading back into the shrub à la the popular Homer Simpson meme.

"Ditchbird is me singing my songs with my lyrics, and that is definitely a lot scarier and more soul-baring," Petersen said.

On the song, "Golden Standard," Petersen seems to address the time it has taken for him to blossom into a front-man.

"I spent years leaving pieces of me in fear scattered around," he sings.

He even borrowed Clark's telltale vibrato and warbled, "I need a new routine to get me through the days," on the opening track, "New Routine."

After the start of the pandemic cut short the Social Animals' first attempt at a European tour, Petersen retreated home to find his singing voice.

"I've always been extremely nervous about my voice," he said.

He could harmonize and take a few songs at a time in projects like his bluegrass band, Saint Anyway. But there are yard parties and then there are rock-and-roll crowds. And if you asked him to fill an hour alone, he'd get beet-red in the face and pour sweat.

"I teach lessons on guitar and talk to kids who are insecure and shy, and I tell them, 'I get it; I totally get it,'" Petersen said. "Music is a great way to get comfy with yourself."

During the making of his latest Ditchbird record, Petersen listened to a lot of Justin Townes Earle, especially the albums "Midnight at the Movies," and "The Good Life."

Listening to those seems like caramel to Petersen's dark chocolate.

On the track, "Brothers," the aftertaste lingers as Petersen reflects on life with a close bandmember, singing, "I love you just like a brother, and I hate you just like one, too. It's easy to tell that we've been through hell, and it's getting harder and harder to do."

When asked if that was a reflection of the Social Animals' arc, Petersen said, "definitely."

"They've become, like, my chosen family," Petersen said. "When you're in a band, it gets really tight. I'm quick to forgive the nasty things, and, we love each other no matter what, but, you know, 'You really suck sometimes.'"

That band is in a tough place, Petersen explained. On the roster of the Oregon-based Rise Records, Social Animals is one of roughly 40 bands, and it's been difficult with so many touring acts in post-pandemic recovery at the same time. So, while the label remains excited about the band, and its numbers of streaming listens reach new heights, the band waits for the right opportunity. They've played one-off gigs in Duluth, Minneapolis and Minot (North Dakota) so far this winter. But it's a different story when it comes to joining a tour in places less familiar with the band.

"We really want to get back to Europe," Petersen said. "But we're a baby band right now." 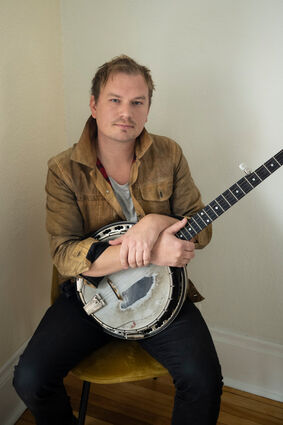 Petersen used to book all the shows for the Social Animals. They'd play anywhere. But the band features a support team now that's spent a lot of money and attention on the band and its eponymous debut release last year. As a result, the band requires venues which can come close to selling out while harboring the band's full stage show.

"That costs a lot of money," Petersen said. "We have to be a lot more preplanned than it has been before."

Petersen said he hopes the band is experiencing a period like the one which saw Duluth's Trampled By Turtles seemingly disappear for an extended time before emerging as a national touring attraction.

"Now, they're headlining Red Rocks once a month," Petersen said with hyperbole. "That's what I'm ideally hoping for."

Until then, he's content to blossom as an artist.

"I'm getting there," he said. "It's thrilling having more on my shoulders, more to lose, more emotion on the line. I'm getting much more comfortable. My 30s are going to be a good decade for me. I've always been very shy; this is kind of forcing me to be out front. It's a thrill."