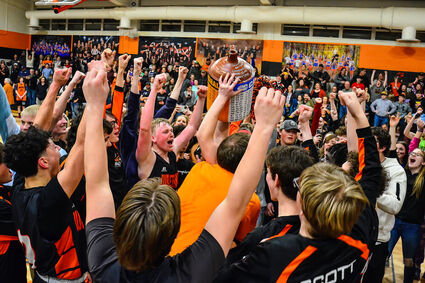 Wrenshall boys basketball players and fans celebrate a win Tuesday against Carlton in the annual jug game. In a classic contest worthy of being the final jug game ever played, Wrenshall will keep the jug as the districts merge all sports this spring. The Carlton girls also kept their jug, defeating Wrenshall at home Monday night.

It was one of those basketball games that saw every few seconds produce a hero - at the line, the three-point arc, in the congested paint, on the open floor.

The last jug game between the Wrenshall and Carlton boys basketball teams was a classic Tuesday night. A bow to tie atop 73 years of a one-of-a-kind rivalry.

After more than two hours of full-throated cheering, intense but clean play among the teams, dozens of lead changes and yes, all those heroes, one last jug game fact remained.

Its permanent home will be in Wrenshall, after a 56-54 win at home Tuesday.

The series of events that led to that fact will sting for the Carlton team, perhaps until the first practice the members of the two programs have as the combined Raptors next season. The Bulldogs were up by a game-high 10 points with 11 minutes left in the 18-minute second half.

That lead came on some stellar play by Zandar Rubesh. In the parlance, he went off on the Wrens as the second half ticked away. A couple floaters, a jumper, knifing through for a lay-in.

Suddenly after a first half that had the teams tied at 25, it was 38-28 Carlton.

Bulldogs coach Shawn Filipiak said he's been trying to boost Rubesh's confidence. "He really blossomed out there," the coach said. "He's opened up his game and found his potential."

Down by 10, Wrenshall's Uriah Loucks was fouled and went to the line. He missed both shots, which pretty much summed up what had been happening to the Wrens as they faced a stifling defense.

Shot after Wrenshall shot was rattling the rim and coming off.

Then along came Peyton Johnson. He hit a three just after a Wrenshall steal and layup. Suddenly, the Wrens were down by only five, and only a minute had passed since that big deficit.

"That took the lid off," Bartczak said of a shot that enlivened what had become begrudged Wrens fans.

Then, 10 seconds later, Rubesh hit again. Carlton fans went wild, thinking the Wrenshall run was stymied. The sophomore was a monster on the boards as well, a wrecking crew of one against the Wrens.

Coming out of a timeout, Woodall got a shot and a foul to make it a four-point game at 42-38 with seven minutes left.

The back and forth was dizzying, the ebb and flow of cheering from both sides made it seem someone was toggling the right-left speaker dial on a stereo.

Johnson hit another three, and then another, and the Wrenshall fans were louder than ever.

"I think my eardrums were bleeding," Woodall said of the swell of cheering.

"That was wild," Johnson said of his shots and the reaction. It got him a second wind. "I'm not tired any more," he recalled thinking.

More frantic minutes ticked off, with teams trading baskets, players finally seeing the urgency and slicing in for layups.

Up by one, Wrenshall played a delay game with three minutes to go. It didn't work as they lost the ball. But then AJ Olesen stole the ball and got a layup to put the Wrens up by three.

The fans looked like they needed a break. It was tiring just looking at the exhausted players on the court.

Woodall scored two of his team-high 17 points after Carlton ended up on the wrong end of a charging call.

Two minutes to go, up 54-50, Wrenshall again went into four-corners, eat-the-clock mode. The Bulldogs once again persevered, forcing another turnover, leading to a Luuke Korpela layup for the Bulldogs.

Wrenshall got a timeout to reset with 52 seconds to go.

With 26 seconds left, the Wrens' Wes Ward made it to the line. He had suffered a miserable night, fighting that lid on the basket. But he hit both free throws, easing the tension in the air as the Wrens went up 56-52. The Bulldogs would need two possessions to win or tie. Timeout.

Wrenshall's Olesen was either goofy from exhaustion or still spinning from all the action around him when he yelled into the crowd, "I love you."

Korpela hit another clutch shot and Carlton got a quick foul to put Loucks back on the line with four seconds left. 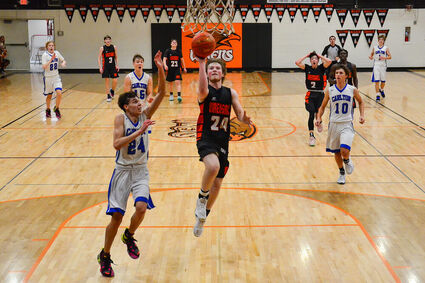 Peyton Johnson goes up for two in the first half Tuesday. He would explode for three three-pointers in the second to help the Wrens erase a 10-point deficit.

Olesen was back at full attention, foiling a promising long inbound pass after Loucks missed the freebie. Carlton had another chance, but not enough time as Wrenshall players swarmed to center court and prepared to raise the jug that will stay in Wrenshall.

"What an atmosphere," a dejected coach Filipiak said after the game. "It's a tough one. But I told them it's just a bump in the road. Let's keep our heads up for the rest of the season."

Korpela led the Bulldogs with 17. Rubesh has 15 and Sam Ojibway 13.

After Wrenshall got the jug on Carlton's floor last year, its first under coach Bartczak, there was a notion to never give it up. "It's good to keep it here," he said.

Adding to Woodall's 17 points was Johnson with 16 and Olesen with 15.

Of course, all that mattered in the stats book was a final score that allows Wrenshall to keep the storied jug in its trophy case.It'll be there a long time.