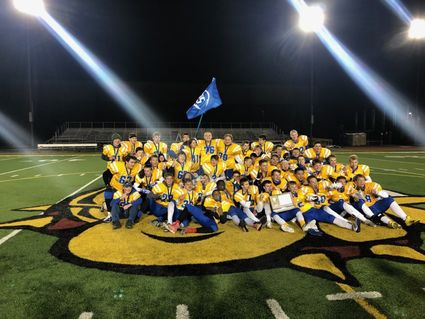 The Esko football team demolished Aitkin 41-14 earlier this season on the road in Aitkin, but winning proved more challenging last week in the Section 7AAA playoffs. In the end, however, the result was still an Esko victory as the Eskomos squeaked past with a 29-28 win.

"Prior to the game when we talked to the team, we told them to be careful because Aitkin is a good football team and they were without one of their better players when we played them the first time," said Esko coach Scott Arntson. "We had a lot of things go right for us in that first game and everything just went our way, but as coaches we knew this was not going to be an easy game."

Preston Lowe scored four touchdowns for Esko in the game, and kicked off the scoring in the second quarter when he picked off an Aitkin pass and returned it 38 yards for the game's opening score. After Avery Liljegren's extra-point kick, Esko led 7-0.

The Gobblers went up 8-7 midway through the second quarter, when Austin Price danced into the end zone from 6 yards out, followed by a two-point conversion run from Owen Miller.

However, the Eskomos answered again when Lowe cracked off an impressive 87-yard touchdown run on an inside counter play. Esko missed the extra-point kick, making it 13-8 for Esko.

"We dialed up some plays for Preston and he hit a big one for us," Arntson said. "Preston has made big plays all year."

With just 26 seconds remaining until halftime, the Gobblers responded when Miller, a halfback, found Gabe Long streaking open for a 26-yard scoring strike, making it 16-13 after the conversion run by Price.

The two teams traded touchdowns early in the third quarter with Esko scoring on an 11-yard run by Lowe, followed by a conversion pass from Dylan Vinje to Trevor Spindler, making the score 21-16 in favor of Esko. On the next possession, the Gobblers got back into the end zone on a 32-yard run by Miller. After the Eskomos thwarted the conversion run, Aitkin led the game 22-21.

"Our guys didn't panic and just continued to go out and make plays," recalled Arntson. "We have a lot of guys who can move the ball for us. Even though Preston had a big day, it took a total team effort from the line up front to all the guys moving the ball when they got their chance."

On the very next possession (and with time winding down in the third quarter), the Eskomos were facing a long field as they started their drive on their own 6-yard line.

Vinje found Lowe racing deep in the middle of the field and the senior quarterback and Lowe did the rest by outracing the Aitkin defenders for a 94-yard touchdown play. Another huge moment was Esko converting on the two-point conversion pass when Vinje found Eli Blue in the end zone making it 29-22 entering the fourth quarter.

"At the beginning of the year we were not sure what we were going to do at quarterback," Arntson said. "In the past we've thrown the ball more and we needed to figure out what our identity as a team would be. Dylan (Vinje) has done a great job for us. We wanted one of our best athletes back there, and in that first game against Proctor we were still trying to figure out what type of team we were. He's an OK thrower, but he is game and when we need something, he finds a way to get the job done."

The Esko defense found a way to get the job done later in the fourth quarter after Aitkin scored on a nine-play 57-yard drive that culminated on an 8-yard run by Miller, making it 29-28. The big play occurred on the two-point conversion run that would have given the Gobblers the lead with just over six minutes left to play in the game.

"A play that went unnoticed on the extra-point run was made by Dan DeMuth, who came in and played defensive tackle on that play. Dan split a double team allowing for the tackle to be made," explained Arntson. "Then it was Brock House coming in from his linebacker spot making the tackle which kept us in front."

The Eskomos then fumbled on the next possession, but the defense again stepped up big by stopping the Gobblers on fourth down - allowing Esko to run out the clock which set off a wild celebration after the game.

"I am just super proud of these kids as they continue to move forward from a tragic situation," said Arntson, referring to the death of backup quarterback Jackson Pfister earlier in the season. "It has been remarkable what these young men have accomplished through this adversity."

Watching his team celebrate their win on the field, Arntson was beaming with pride over how far this team has come.

"I had a lot of emotions, but most of them were for the kids: I just felt really good for them," said Arntson. "I was happy with the fact that they were able to reap the rewards and the benefits for all their hard work in the off season."

The Eskomos will now face Section 5AAA winner Annandale at Brainerd High School Saturday at 3 p.m. in the first round of the Minnesota State High School Class AAA football tournament.

"We'll be ready to play," Arntson said. "We have a truly remarkable group of kids, so I know they will give everything they have."