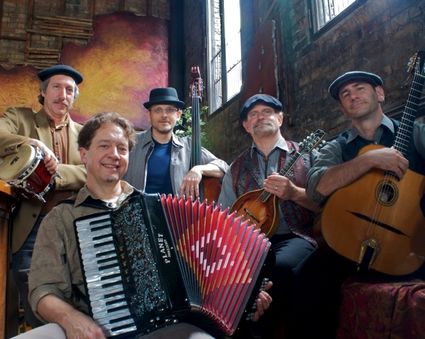 Imagine yourself in the heart of Paris sipping coffee and listening to a strolling accordionist. Or at a club in Argentina dancing the tango? Now see yourself sitting at the new Moose Lake School auditorium hearing all those exciting and colorful strains of music performed live by a nationally renowned ensemble.

The Café Accordion Orchestra are coming to Moose Lake at 2 p.m. Sunday, Nov. 17 as the featured artists in the second Agate Encores concert of the season. The mission of Agate Encores is to present professional entertainment to the greater Moose Lake community.

CAO performs an eclectic mix full of French flare, Latin heat and Bohemian attitude. The heart of the CAO repertoire is the romantic, gypsy-influenced valse-musette, a popular French style of dance that was all the rage in Paris throughout the early 20th century. The group complements the musettes with swing, ballads, tangos, chachas, rumbas and cumbias to create a wonderfully varied show punctuated with good humor and expressive abandon. Their high level of musicianship and passion for performance make them an entertaining concern act as well as a great dance band.

CAO is led by Dan Newton on accordion and vocals, with Eric Mohring on mandolin, violin and vocals, Erik Lillestol on bass and vocals, Robert Bell on guitar and vocals, and Joe Steinger on percussion. Together since 1995, they have appeared in New York’s Lincoln Center; the International Akkordeon Festival in Vienna, Austria; the Minnesota State Fair and more festivals, theaters and dance halls across the U.S.

Tickets are $15 and available online at http://www.agateencores.org or at the door before the concert. Members of the high school History Club will provide a coat check; a freewill donation will help sponsor the club’s activities.