Arts for a spark

Cloquet gets $30,000 in arts money for revitalization 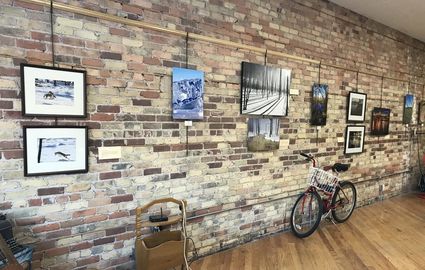 Cloquet’s downtown revitalization efforts received a nice boost last week when, along with three other Minnesota municipalities, the city was selected for the 2020 Artists on Main Street cohort. Over the next two years, Cloquet will receive $30,000 for project funding and program implementation.

It took the collaborative efforts of public employees, nonprofit organizations, businesses and individuals to bring the Artists on Main Street initiative to Cloquet as they all shared a similar vision for the West End business district.

Key to Cloquet’s getting the money was the efforts between Cloquet Community Development Director Holly Hansen and Emily Fuerste Swanson, of the Oldenburg Arts and Cultural Community.

“Lincoln Park is an example of intentionality in working to make one (area) a different type of destination in a city,” she said, describing Cloquet’s West End business district as “a gem of a location that has had a blind eye turned to it, that has vacancies, that has had blight, that needs to be revitalized.”

“It’s got untapped potential,” she said. “Why not let some artists throw in their energy and see what comes from it?”

Swanson developed the idea further with her own long-range vision.

“We imagine pedestrians, hikers, bikers, canoeists and kayakers enjoying the district,” said Swanson, drawing from the city’s application for the Artists on Main Street Program. “We see all kinds of events taking place in this restored two-and-a-half-block area, with new and expanded businesses, galleries, eateries, performance spaces and a craft brewery. We envision murals, sculpture, exhibits, and recreational amenities throughout the district.”

Artists on Main Street will partner the city, local businesses and artists with an opportunity to connect with the story of this historic area of Cloquet, and interpret that story for a new generation. This process of locally inspired and arts-activated community development is intended to breathe new life into a unique part of Cloquet that already has a rich story to tell.

In an interview with the Pine Knot News, Hansen said Cloquet was selected, along with Two Harbors, Cook and Mahnomen, out of 39 Minnesota cities that applied.

That Cloquet was selected came as a bit of a surprise.

“It’s always delightful to have an unexpected, positive project land on your desk,” Hansen said. “It wasn’t on our radar screen until very recently, but it aligns perfectly with the work and efforts we are trying to do here.”

Hansen presented the partnership agreement to the Cloquet City Council Dec. 3 and the agreement was approved. Hansen told the council they’ve been encouraged to use the money on myriad smaller projects rather than one giant one, although she stressed that they are open to all suggestions.

Swanson’s group will be responsible in coordinating the Artists on Main Street Project, setting up informational workshops and facilitating the selection of artists, among other duties.

Swanson said there will be a set of creative workshops that artists will be invited to attend along with the cohort steering committee.

“Creative placemaking is locally inspired and arts-activated community development,” Swanson said. “It is thinking carefully about what is abundantly and irreplaceably around us, not only the people that have come before, but the place itself, as well. This place, right here on the St. Louis River, has this interesting history that began with our Fond Du Lac neighbors, and that now also includes the settlers.”

“What an honor to have an entity like the Oldenburg Arts and Cultural Community,” Hansen said; “that actually is an expert in facilitating really complex art and music — to walk with artists and invite them in to have these conversations on a different level than the city can have.”

The idea of using arts to spur community development is not new, and it has already begun to find a home in Cloquet’s West End business district.

When the Pine Knot News was preparing to open its offices at 122 Avenue C last year, newspaper board member and contributing writer Ann Markusen remarked that the multi-colored brick walls in the building’s interior would make a wonderful gallery backdrop.

Markusen is a widely-

recognized expert on understanding artists’ impact on community vitality, and was instrumental in establishing the art opening hosted every two months at The Knot Gallery.

Swanson shared how the Oldenburg community owes much to Markusen’s influence. “It has been incredibly important to us that she is here and has been such a huge inspiration,” Swanson said.

More information about this event, and the Artists on Main Street Program, is available by calling Emily Fuerste Swanson at (763) 226-6828, or emailing [email protected]