First Nordic race of the season comes with surprises for CEC 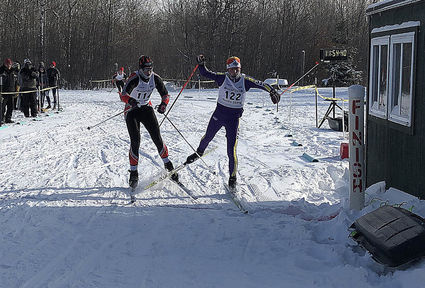 Cloquet junior AJ Maijala crosses the finish line just inches ahead of East's Samuel Javaherian in a thrilling end to his skate race at Duluth's Snowflake Nordic Center. Maijala finished in 24th place in a time of 19:40.8, and was CEC's fifth fastest boys varsity skier.

The first Nordic race of the season Tuesday came with a couple surprises for the Cloquet-Esko-Carlton team.

2.The girl's fastest skier Tuesday was Halle Zuck, an Esko sophomore who was skiing junior varsity at the Snowflake Nordic Center in Duluth.

Head coach Arne Maijala said he wasn't surprised to see Zuck turn in a fast time, but he didn't expect her to be THE top girls skier.

Halle Zuck finished her JV race - a 4K race, just like the varsity - in 23:05.5, good for fourth place in that race and 38 seconds ahead of the top CEC girls varsity finisher.

"We knew she was a strong athlete and a good skier, because grew up with family that does that," he said, explaining that Zuck cross country skis with her family but has always competed in alpine skiing. "Now she's skiing for both teams but I think she may find out that she's a very talented Nordic skier."

On the boys varsity side, Cloquet junior Benjamin Bauer took third place with a time of 15:37.5, followed by Josh Sanders (17:35.9) in ninth place, Carlton senior Spencer Hoeffling (17:58.6) in 13th and Cloquet sophomore Cale Prosen (18:29.2 in 16th place. The boys team took third place (out of seven teams), but were only five points behind second-place team Grand Rapids.

Zuck wasn't the only pleasant surprise for the coach, who has about 70 kids in grades 7-12 out for the team this year.

"I saw a lot of kids show some huge improvements from last year," Maijala said.

He specifically mentioned senior Jordan Hernandez - who has always raced JV and did again on Tuesday - who turned in a fast enough time (21:34.5) have placed seventh on the varsity team, he said.

"He's knocking on the door to be a contributor," Maijala said.

CEC freshman Jordan Chopskie placed just ahead of Hernandez in the JV race, taking sixth place in a time of 21:08.9.

Conditions for Monday's races were not ideal, Maijala said.

"The snow was slow and it was cold," he said. "Snowflake was a nice course for our first meet ... not nearly as difficult to ski as the Grande Avenue Nordic Center (where the meet was originally scheduled)."

Still, he's not upset about all the snow. 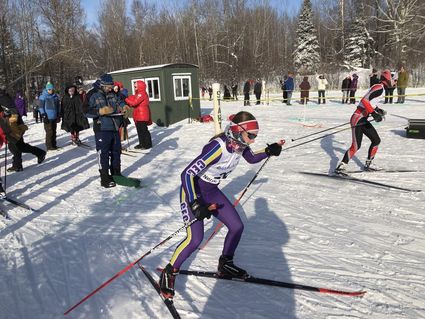 Cloquet freshman Charlotte Ripp takes off in her first race of the 2019 varsity season. Ripp placed 25th in 24:18.1 and was the second fastest skier on the girls varsity team Tuesday.

"This is awesome!" the head coach said. "I have been coaching Nordic four years now and never had good snow this early."

Maijala gave a shout out to his coaching staff and to kids helping kids learn. He is assisted by Tim Stark, along with Ben Croft, Bob Fox and Gus Gustafson are volunteer assistants. Ann Gustafson is the new middle school coach for the younger skiers.

The CEC Nordic team will host its Invitational meet Thursday, Dec. 12 at Cloquet's Pine Valley Recreational Center. Racing starts at 11 a.m. Individual start times will be listed at http://www.stevestiming.org/. Spectators are encouraged to come. There will be concessions for sale in the chalet, outdoor fire pits and lots of skiers. There is no charge to watch, but the concession sales go toward the team.