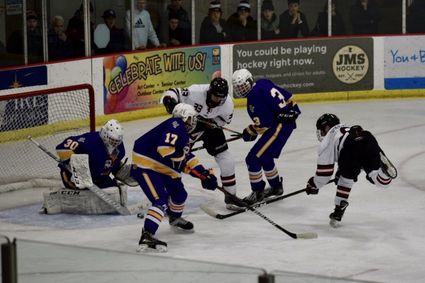 Lumberjacks senior goalie Owen Carlson makes a save against Eden Prairie's Ben Steeve at Eden Prairie Jan. 10. The Eagles squeaked by the Lumberjacks 3-2. Midway through the second period the 'Jacks trailed 3-0, but a goal by Cole Ketola in the second and a goal by Christian Galatz in the third pulled the visitors closer but the Eagles, a team that includes former Cloquet player Mason Langenbrunner, were able to hang on for the win. Carlson made 37 saves for CEC.