East gets one back on 'Jacks 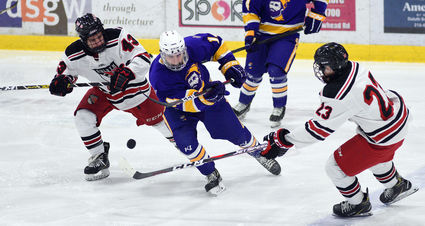 CEC's Brayden Tyman tries to break out with the puck Monday against Duluth East in Duluth. The Lumberjacks, who beat the Greyhounds earlier this season, went down 5-0.

This is probably not what Cloquet-Esko-Carlton boys hockey coach Shea Walters envisioned as the latter part of the hockey schedule winds down. After falling in tough back-to-back games against Hermantown and Holy Family Catholic last week, the Lumberjacks lost Monday night 5-0 to Duluth East at Heritage Arena in Duluth.

CEC fell behind 1-0 at the 6:04 mark of the first period when Charlie Erickson scored on an assist from Ryan Cummings. It looked like the 'Jacks would get right back in the game when they went on the power play a few minutes later. The puck popped free to the right of the East goaltender, leaving a CEC player an open net to shoot at, but the puck hopped a bit and the shot went wide.

That seemed to be the turning point in the game in favor of the Greyhounds.

"We had two really good opportunities that could have resulted in a couple of goals," observed Cloquet coach Shea Walters. "We just didn't convert and they picked up some momentum off their penalty kill."

Unfortunately for CEC, the Greyhounds added goals by Jack Fellman and Josh Locker as they built a 3-0 lead after the opening stanza. Walters started sophomore goaltender Jacob Walsh in nets against both Hermantown and Duluth East, but after the scoring barrage, Walters brought in senior goalie Owen Carlson in an effort to get his team back on track.

"We have a really good group of goaltenders and Walsh had played well under pressure at Hermantown," Walters said. "We felt he was up to the challenge and would give our team a good chance to win. East worked hard to get their five goals and we have to give them credit. They got bodies to the net and got second-chance opportunities." 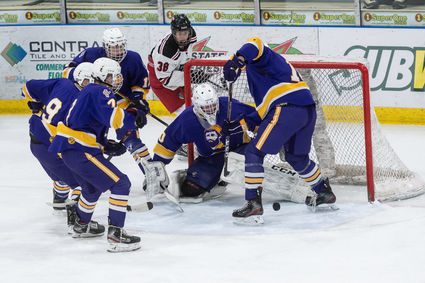 Cloquet scrambles to clear a rebound off goalie Owen Carlson during second period action against Duluth East at Heritage Arena in Duluth Monday.

East got more of those chances in the second period when they tallied goals from Cole Christian and then Erickson added his second goal of the season, giving the Greyhounds a 5-0 lead entering the final period. There were no goals in the final period as the 'Jacks tightened things up around the net.

The Greyhounds did the same in pulling out the win to avenge an earlier season loss to CEC.

For now the Lumberjacks have to figure out a way to get back on the winning track. That will be difficult because their next game is against White Bear Lake Saturday afternoon at home.

"We have to stay positive and get back down to the fundamentals of out-working our opponents," Walters said. "It's not going to be easy, but we believe we have a great group of kids that will rise to the occasion."

For the game, the combination of Walsh and Carlson made a total of 23 saves while Konrad Kaush finished with 27 saves to get the shutout for Duluth East. The loss drops the CEC record to 12-10-1 overall. The win by East gives them an overall record of 8-10-1.