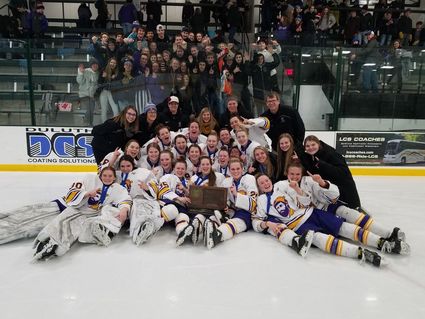 The CEC girls hockey team and coaches savor the moment: a section championship and a trip to the state tournament next week.

Just a couple of weeks ago, the Proctor/Hermantown Mirage hung a 6-1 loss on the Cloquet-Esko-Carlton girls hockey team, the first loss in 17 straight games for CEC. On Wednesday night the two teams met in the Section 7A title game and it was CEC coming away with a wild 3-2 win to claim the championship.

The Lumberjacks had been on a record-setting win streak prior to the loss at the end of the regular season. In that game freshman goalie Araya Kiminski was knocked out of the game. Flash forward to Wednesday night - as the two teams tangled once again - and Kiminksi was the difference in the nets, along with her team's defense.

CEC led the game 2-1 entering the final period and eventually took a 3-1 lead, but the Mirage were desperate and turned up the pressure; however, the CEC defense and Kiminski kept them at bay, and eventually the 'Jacks won.

CEC opened quickly with two goals on almost identical plays within 40 seconds of each other in the first period. The first goal was scored by Kiana Bender, who forced a turnover and ripped a shot past Mirage goalie Abby Pajari, making it 1-0. Moments later it was Dana Jones who got the Mirage defense to cough up a puck as she made it 2-0. Both CEC goals were unassisted.

The 'Jacks were carrying the play early in the first period against the Mirage as they appeared to change up their forecheck from their previous games - which seemed to cause issues for Proctor/Hermantown. However, CEC took a penalty midway through the period and the momentum appeared to turn toward the Mirage. Eventually they pumped in a goal with just 2:07 left in the period when Aurora Opsahl scored unassisted after picking up her own rebound on a shot that was initially saved by CEC goalie Kiminski. At the end of the first period the Mirage held a 15-9 edge in shots on goal.

In the third period the Lumberjacks got an important goal from their all-time scoring leader, Taylor Nelson, early to give them a 3-1 lead.

From that point on, the Mirage stormed the net and Kiminski was called on to make save after save as she continually stonewalled the efforts of Proctor/Hermantown. At one point the Mirage hit a crossbar and then Kiminski slid over to stop a point-blank shot to keep CEC up by two.

Hailey Winklesky eventually got a puck past Kiminski with 1:56 left, but the Lumberjacks, and Kiminski, kept the puck out of the net the rest of the way as CEC claimed the win and their first trip to the state tournament since 2009.

Kiminski made 33 saves on 35 shots to preserve the win.

The two Section 7A semifinal wins - CEC over Hibbing/Chisholm and the Mirage over Marshall - put two freight trains on a collision course with the right to go to the state tournament on the line.

The Lumberjacks did their part in the first semifinal game Saturday by downing the Bluejackets for a third time this season, notching a 5-1 win.

Kiana Bender got things started just 5:40 into the opening stanza by slipping a goal by Bluejacket netminder Addison Hess, making it 1-0 for the 'Jacks.

"The first goal set the stage for the entire game," said CEC head coach Courtney Olin. "We talked a lot about the importance of setting the pace and coming out with high intensity, and we did just that."

Bender's goal was followed by two quick goals by Taylor Nelson - who ended up with three goals in the game for CEC - making it 3-0 at the 10:36 mark of the first period. However, Hibbing/Chisholm answered with a goal with just 21 seconds remaining in the first period, giving them life entering the lockerroom.

"We knew going into the game that they are extremely well-coached and they play solid position defense," Olin said. "We knew we would have to capitalize on any scoring opportunity we had."

The Bluejackets mounted a strong effort in the second period, but CEC goalie Araya Kiminski withstood their forecheck, keeping the 'Jacks up 3-1 after two periods.

"Araya played very well in the nets for us," explained Olin. "It has been fun to see her progress and mature as a goaltender throughout the season."

Nelson, CEC's top scorer, showed her scoring prowess by notching her third goal of the game at 5:42 of the third period, giving the 'Jacks a 4-1 lead and a bit of breathing room. As the Bluejackets got desperate they began to apply pressure in the CEC zone, and eventually the Lumberjacks took a penalty, giving H/C life. Unfortunately for them - and fortunately for the 'Jacks - Jaxie Pogorelc was the recipient of a nifty play by Dea DeLeon in a shorthanded situation as Pogorelc fired a puck past Hess, making it 5-1 and effectively putting the game out of reach.

Kiminski made 13 saves for CEC on 14 shots and Hess finished with 17 saves on 22 shots for Hibbing/Chisholm. 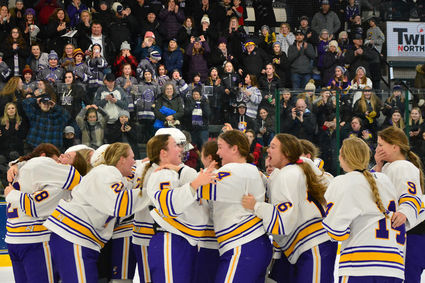 The second game of the semifinals on Saturday saw the Mirage strike four second-period goals as they skated away with a 4-0 win over the Duluth Marshall Hilltoppers, setting up the rematch with CEC on Wednesday.

"We know going in that they are a very skilled team with a lot of depth, and we are going to focus on cleaning up our defensive end over the next few practices to prepare for Wednesday," Olin told the Pine Knot News earlier this week. "We are so proud to be playing in the section semifinal for the first time in 11 years, but we aren't satisfied with just being there. We want to show up on Wednesday and make some noise."

The Lumberjacks are now 25-3 on the season.