For Cloquet, it's a small (hockey) world, after all 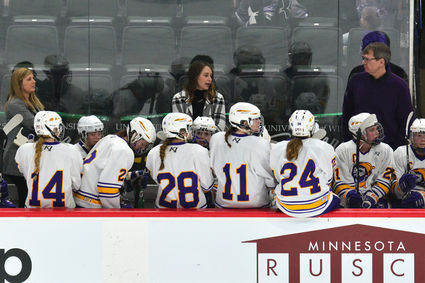 Anyone attending a Cloquet-Esko-Carlton girls hockey game this year would probably not have noticed anything unusual when they looked behind the team bench at the coaching staff. A glance would reveal a coaching staff of two women and one man. But the story of this group goes much deeper than gender.

Head coach Courtney Olin appears to be no different than any other coach. But Olin, whose maiden name is "Esse," is the daughter of assistant coach Dave Esse, who led the CEC boys hockey program and was at the helm when the 'Jacks boys team made the state tournament in 2002 and 2008. Joining that pair is Courtney Josefson, who happens to be a former assistant coach at Proctor/Hermantown.

Both Courtneys were standout high school hockey players. Olin played in Cloquet for legendary coach Dick Bartholdi and was on the last CEC girls team to make the state tournament in 2009. Olin then went on to star at St. Scholastica. Meanwhile, Josefson played high school hockey at Bemidji, and then went on to star in Division I at St. Cloud State. The nickname for both CEC and Bemidji is Lumberjacks.

That brings us to Dave Esse, who also starred at CEC as a hard-nosed defensemen and then moved on to play at the University of Wisconsin-Superior, where he was inducted into its athletic hall of fame. Esse coached two CEC boys hockey teams to the state tournament after taking over from another CEC hockey icon, Tom McFarlane.

To add an extra bit of drama to CEC's first trip to the state tournament in 11 years was the fact that the Lumberjacks opened play as the No. 3 seed in the second game of the afternoon session Wednesday against Hutchinson. Hutchinson's assistant coach is Montana Hemling. "Hemling" is her married name, but many people will remember her as Montana Vichorek, who graduated in 2008 from Cloquet and was a teammate of Olin. Hemling later went to Bemidji State where she was a four-year star for the Beavers.

It is often said that the hockey world is a small world where everyone knows everyone else. In the case of the 'Jacks coaching staff and Hemling, it is absolutely true.