Rodd's Ramblings: In a word: Teammates 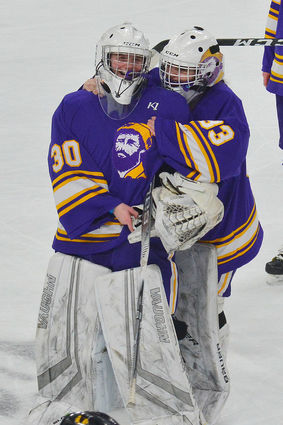 Araya Kiminski, left, had a great playoff run for the Lumberjacks and was supported by fellow goalie Lauren Maslowski. Both had spectacular seasons and it was a difficult coaching decision to stick with one for the playoff run. Writes Kerry Rodd: "As I sat and watched the playoffs and the way Maslowski embraced her friend and supported the team through her actions, I actually had a tear in my eye."

This past week the Cloquet-Esko-Carlton girls hockey team provided the Pine Knot News area with an abundance of emotional moments, from winning a section championship for the first time in 11 years all the way to the state title game. For me the wins, and the final game loss, are great, but there will be other memories that I will cherish far more as a sports fan.

There will be no bigger moment than the way senior goaltender Lauren Maslowski supported freshman goalie Araya Kiminski. The two goalies split time most of the season. At playoff time, the CEC coaching staff made the difficult decision to go with Kiminski, who had an amazing playoff run and helped lead her team all the way to the championship game. Both goalies had incredible statistics during the season so that had to be a tough decision.

As I sat and watched the playoffs and the way Maslowski embraced her friend and supported the team through her actions, I actually had a tear in my eye.

In this day and age you just don't find a person who is more about the team than themselves, especially when it was her senior year and the other player was only a freshman. It would have been so easy for Maslowski to play the pity card and to rip the team apart, but instead she chose to do what was best for the team, and that was to support her friend, her team and her coaches.

Maslowski's willingness to be about the team was not lost on her teammates. I interviewed both Taylor Nelson and Kiana Bender following the tournament and both of them said what Maslowski did was the difference in winning and losing as much as any goals that were scored. Courtney Olin, the head coach, also heaped praise on Maslowski and talked about her character and how much it meant to the team. 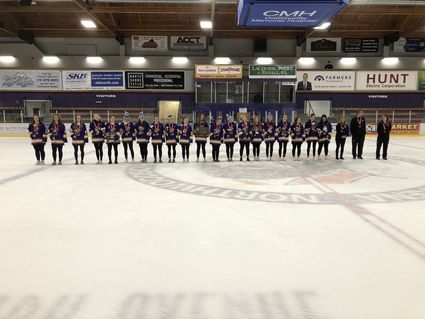 I can only imagine how important Maslowski's support was to Kiminski's confidence - knowing that your teammate, despite being a senior, was willing to step back and support her teammate no matter how hard that was.

So many teams are torn apart from the inside. Many talented teams don't reach their full potential because of people who become self-centered and are unwilling to do what is best for the team no matter how tough that may be.

All of us can learn from what this young lady did for her team. I am sure her family is extremely proud of her dignity and character, and rightfully so. Whatever her parents did in raising her should be bottled and given to every kid in America. What a great country we would have.

Again, to her parents, to her family, and to Lauren herself, thank you for showing us what it is to be a true teammate.