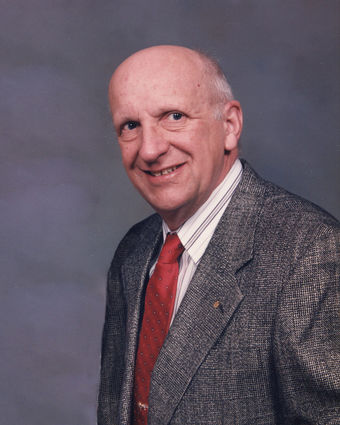 Dale A. Pearson, 84 of Carlton died on Thursday, February 27, 2020 in the Cloquet Community Memorial Hospital. Dale married JoAnne Kvamme in 1960 and their 60-year love story inspired everyone around them. They built their dream home on the grounds of his parents’ former potato field.

Dale survived polio at the age of 18 and the experience gave him strength and determination for the rest of his life. After graduating from Carlton High School, Dale worked for Conwed for 10 years and was then one of the first drivers hired by UPS in this area. He served UPS for over 30 years and retired in 1993.

Dale was a charter member of the Carlton Area Lions and served on the Twin Lakes Township Board from 1978 to 1999. He was a member of Our Savior’s Lutheran Church in Cloquet.

Dale loved music, especially the Big Band Era, and he played the saxophone. He had many interests including museums, vintage aviation, WWII history, and driving—he and JoAnne loved to travel. He will be missed by all who knew him.

Dale was the eldest born to Roy and Tina Pearson. In addition to his wife, JoAnne, he is survived by his sister, Gail Thornton and brother, Don Pearson (Bev); sister-in-law, Marce Pearson (his brother Blaine died in October 2019); Special Nephew Scott Pearson (Sandra Immerman) and their daughter Ella Pearson. Special Cousin Milan Huard (Sandy) and their children Jessie Smith (Leo) and Matt Huard (Andrea). He loved and was beloved by many, many cousins of JoAnne’s who he treated as grandchildren. Family was the most important thing to Dale.

Visitation: 10:00 until the 11:00 a.m. Memorial Service Thursday, March 5, 2020 in Our Savior’s Lutheran Church, 615 12th St., Cloquet. A time of lunch and fellowship will follow in the church social hall. Memorial contributions may be made to Carlton Area Lions Club or Our Savior’s Lutheran Church. Arrangements entrusted to Atkins Northland Funeral Home. To sign the guest book and offer an online tribute, see http://www.atkinsnorthlandfuneralhome.com