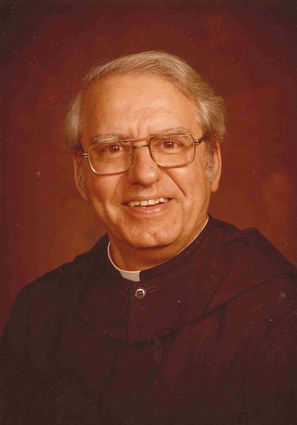 Donald Joseph LeMay, 97, the oldest of five children, was born on September 24, 1922 to Edward and Alice (Demers) LeMay of Cloquet, Minnesota. After graduating from high school in 1940, he worked at Northwest Paper Company, Cloquet, until he was accepted into the military in 1945 and served in Alaska and the Aleutian Islands.

Following his discharge from the U.S. Army, Don was enrolled in Saint John’s University on the GI Bill and received a bachelor of arts degree in business and economics in 1949. After working for several years, he returned to St. John’s and was accepted as a novice in the monastery in 1952, receiving the religious name of Lanfranc. He was professed as a Benedictine monk in July 1953 and continued his studies for the priesthood. He was ordained in June 1957. He resumed his baptismal name of Donald after the Second Vatican Council.

1957-61, Father Don taught Gregorian chant and theology at St. John’s Preparatory School and University. In 1961 he became the first director of admissions for Saint John’s University.

In 1974 Father Don was appointed Director of Planned Giving, beginning his long career in development for the Abbey and University. From 1981-84, he served as Vice President of Institutional Advancement and Development until his retirement in 2002.

Father Don greatly enjoyed social gatherings of family, friends, and alumni as well as within the monastic community. Students fondly remember him on the keyboard with Father Gordon Tavis playing the violin or trumpet on Wednesday nights for a number of years in the campus pub, Der Keller.

At the Saint John’s University homecoming in 1999, Father Don was given the Father Walter Reger Distinguished Alumnus Award. His warmth and personal touch made him an exceptional ambassador of goodwill to generations of alumni and friends of Saint John’s. He was ever present to them as a generous, loving and affable minister, even in retirement.

He was preceded in death by his parents; brothers Les and Duane LeMay; and a sister, Mardelle Proulx. Also preceding were his niece Teri Proulx; nephews Paul and David Proulx; and nephew-in-law, Don Johnson.