Soccer practice is on despite hold on games 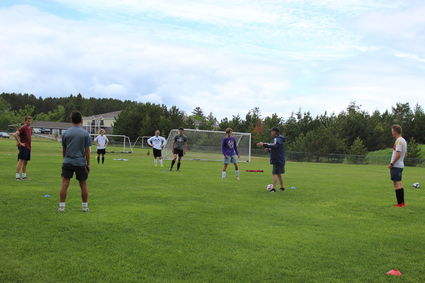 Players and coaches are socially distanced on the pitch this week as part of a summer camp for prospective Cloquet varsity and junior vaqrsity players. No games can be played right now but that may change before the end of the summer.

In a normal spring and summer, area youth soccer players would be smack-dab in the middle of their seasons, but with the COVID-19 pandemic that has all changed. Until recently, no teams had even begun practice. Last week Gov. Tim Walz announced a plan that would lead teams and organizations into the next phase of the state's reopening process and which will now allow at least some soccer players to hit the pitch once again.

"Our summer recreation and rec-plus leagues have been canceled," said Cloquet Youth Soccer Association youth co-coordinator Bobbee Conway. "Our competitive teams have begun practicing, but that is all they are allowed to do under the current guidelines."

The Phase 2 guidelines that took effect Wednesday allow for up to 25 people in a group, and no more than two groups on a full-size soccer field.

"The competitive teams that are practicing are mainly working on skill development, but they continue to practice social distancing," Conway said. "This has been tough because normally this would be the middle of our summer season right now and it has been difficult to keep everything in order. Our other co- coordinator, Leigh Rahkola, has been incredible about communicating what's going on at the state level and through the Arrowhead Youth Soccer Association."

There are currently three girls' competitive teams that are practicing in Cloquet at the U-14, U-16 and U-18 levels, but no boys teams are practicing in Cloquet. Because the boys' numbers weren't high enough in the older age divisions, many had signed up to play with competitive leagues in the Duluth area including the Gitchi Gummi and East Select soccer clubs, but those clubs are also running into problems.

An email sent to Gitchi Gummi Soccer Club parents and players on May 22 stated that a worst-case scenario had become reality for their soccer teams when the Minnesota Youth Soccer Association canceled the 2020 league spring season. Also canceled was the 2020 tournament-

only teams season, as well as the Head of the Lakes tournament and the Lake Superior Open.

Meanwhile, at least some good news surfaced recently when it was announced that the University of Minnesota Duluth women's soccer coach, Greg Cane, would run a camp in Cloquet for potential boys varsity and junior varsity soccer players, which started Wednesday at Hilltop Field. The camp includes skills instruction with social distancing guidelines in place.

At this point the fall soccer season is still up in the air as leagues across the state await further news from the governor's office about whether or not things will open up even more throughout Minnesota. While high school boys and girls play fall soccer for their local high school teams or rec soccer, players ages 5-to-13 have the option of participating in a fall program that usually starts in August. 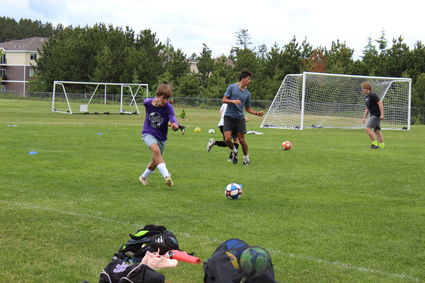 Tyler Issendorf makes a pass during a training session on Wednesday, June 10th.

"We just have to wait and see at this point," said Conway. "We really can't predict what the future holds and we just don't know how, or when, we will be able to get things started. It's been an interesting time, and there has been a lot of work to try and get this all figured out, but for the most part we are just waiting for word from the governor as well as MYSA."

• Phase 3 allows for resumption of full team training sessions, with specific protocols in place to reduce the spread of COVID-19.

• Phase 4 allows for the resumption of league matches, with specific player and spectator protocols.

• Phase 5 allows for resumption of youth soccer as conducted prior to COVID-19, including tournaments.