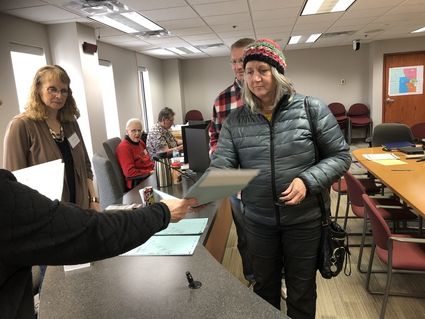 As is everything in this year of Covid-19, the election season is also changed. Far more people have voted absentee this year than ever before, and more mail-in ballots are being cast in Carlton County for Tuesday's primary election than in the past. Additionally, a state rule change giving mail ballots an extra two days to reach the courthouse will likely delay results in any close races until the end of the week.

But polling stations will also be open as usual (sort of) on Aug. 11. According to the Minnesota Secretary of State office, which oversees elections, election officials and voters are encouraged to follow physical distancing measures and, under a mandate introduced last month, must wear masks indoors.

Carlton County auditor/treasurer Kathy Kortuem said they are working to be as safe as possible at the polling stations. The state provided masks for election judges and a few disposable masks for voters, who should wear their own masks as now required in public indoor places in the state. Hand sanitizer and surface cleaners will be provided to each polling place, and social distancing measures will be in place, she said.

As of Monday, Aug. 3, the total number of absentee ballots requested sat at 2,305. A total of 3,687 ballots had been sent to voters in precincts where voting is by mail. Combined, that is a total of 5,992 ballots - Kortuem said 2,086 of those ballots had been returned as of Monday.

Those who haven't already popped their ballots into the mail, might want to bring their mail or absentee ballots to the courthouse before or during Tuesday's primary rather than facing the possibility of not being counted.

Mail-in ballots must be postmarked on or before Aug. 11 and delivered by U.S. mail or a package delivery service by Thursday, Aug. 13. That means ballots received on or after Friday, Aug. 14 won't be counted, even if they are postmarked by election day. The rule is a change from previous election law requiring mail ballots to be received by the day of the primary. That could mean that results will be delayed until the evening of Aug. 13, depending on how tight the primary races are. It will also delay official certification of election results.

• You can come to the courthouse from 7 a.m. to 8 p.m. on Election Day and cast an absentee ballot if you didn't receive or you lost your ballot.

• If you received your ballot in the mail, you can deliver it to the courthouse until 8 p.m. Election Day.

• If you received your ballot in the mail, you can also have someone deliver your ballot to the courthouse by 8 p.m.

• If you are not a registered voter, you can come to the courthouse and register to vote and receive a ballot on Election Day.

For residents who have a polling place, she shared these tips for election day:

• If you have not requested an absentee ballot before Election Day, you must go to your polling place to vote.

The statewide primary election will determine which candidates will be on the ballot in the November general election. If multiple people are running under one political party, a primary is required because only one candidate can be on the ballot in November. The primary is also used on nonpartisan races, such as those for county board or city council seats, when multiple candidates seek the office.

Carlton County voters will see candidates for U.S. Senate, U.S. House, Carlton County Board of Commissioners District 5, and Cloquet City Council Ward 5. The primary election will be held in all designated election precincts in Carlton County.

U.S. Sen. Tina Smith, a Democrat, faces challengers Steve Carlson, Ahmad Hassan, Paula Overby and Christopher Seymore in the primary, as she seeks her first full six-year term in office. Smith was appointed to the Senate in January 2018 and won a special election that November to stay in office. Republicans will have to decide if they want to nominate former U.S. Rep. Jason Lewis or rivals John Berman, Bob Carney, Cynthia Gall and James Reibestein.

U.S. Rep. Pete Stauber of Hermantown, a Republican, has a challenger in Duluth's Harry Welty to determine who will face Democrat Quinn Nystrom.

Three candidates will face off in the primary election for the District 5 seat on the Carlton County Board of Commissioners, including challengers Alex French and Marci Moreland, and incumbent Gary Peterson. Two of the three candidates will advance to the general election in November. District 5 includes the cities of Moose Lake, Kettle River, Wright and Cromwell, along with the surrounding rural areas.

Three candidates - Elizabeth "Lyz" Jaakola, Dennis Painter and Dave Hallback - will face off in the primary election for the Cloquet City Council Ward 5 seat currently held by Steve Langley, who is not running again. Two of the three candidates will advance to the general election in November. Cloquet's very large Ward 5 includes everything in the city limits north of the St. Louis River and west of Cartwright and University Roads, and north of Houle Road.

The Pine Knot News ran candidate profiles for Cloquet City Council and Carlton County Board of Commissioners in the July 10 issue. Read those under the "Elections 2020" tab at http://www.PineKnotNews.com or stop by the office at 122 Avenue C to purchase a back issue of the newspaper. Find a map of the Cloquet wards and precincts online at http://www.cloquetmn.gov/home/show document?id=2316.