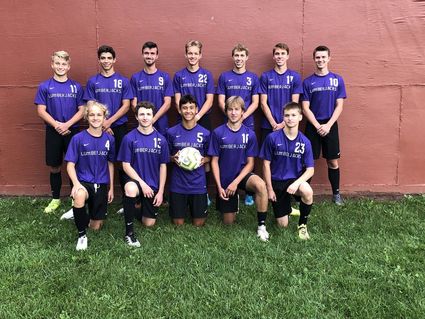 Cloquet-Esko-Carlton boys soccer coach Dave Bergan is entering his second year at the helm of the Lumberjacks. Last season the 'Jacks finished with a record of 8-9-1, but with the return of a mass of seniors, Bergan is hoping the squad can parlay huge numbers into big success.

Just how many seniors will this year's version of the Lumberjacks have on the roster?

"We have 12 seniors on the team this year," Bergan said. "The goal is to become conference champs and move that success to the state tournament," he added.

The Lumberjacks lost five seniors last year including Otto Cockburn, Caleb Swanson, Ryan Conway, Alex Munoz and Jake Huhta. They also lost to Hermantown in the second round of the sectional playoffs, but the CEC players are confident they can overcome the losses with a stout class of seniors this year.

"We feel fortunate and excited to have a season this year," Bergan said.

All three captains are strong players, but there are many talented kids on the team this year.

"There are so many kids returning to the squad this year it is hard to name a few key players, as they are all integral to the team's success," Bergan said.

New to the team are Esko students and brothers Jordan and Elijah Aultman, who hail from Sierra Leone, a country on the southwest coast of Africa.

"They bring a different style of play to the field and I am excited to see them in action," Bergan said. 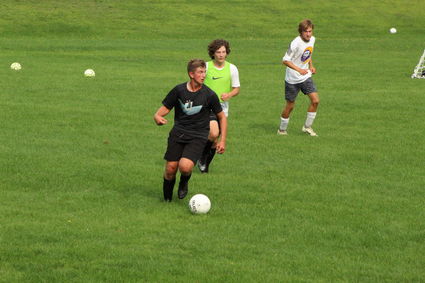 The only senior not pictured above, Joe Baker, looks for a pass during a recent practice at Hilltop Park.

After the spring competitive soccer season was canceled in Minnesota due to the pandemic, many players on the team were able to attend a six-week summer camp headed up by longtime UMD women's soccer coach Greg Cane. The hope is that the work they put in this summer - and the fact that they practice together instead of on separate club teams or not at all - will be rewarded this fall.

"The team has worked diligently over the summer to make sure they came into the season prepared and ready to start where we left off last year," Bergen said. "The hard work that they have put in before the season has shown in practice and each day they are honing their skills and knowledge with hard work. We are excited to start the season."

The CEC boys team was scheduled to open the season at 11 a.m. Thursday at home against Two Harbors. Then they play Hibbing away the today and Proctor away on Monday at 4:30 p.m.