Absentee voting opens; election is on 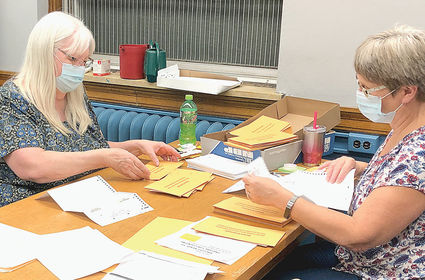 Carlton County acting auditor/treasurer Kathy Kortuem, left and Roxanne Oswald open mail ballots on primary election night in August. The primary was a good trial run for an expected increase in mailed ballots for the November general election. Ballots are in the process of being mailed out. Starting today, in-person absentee voting started.

It may feel too early to vote for the Nov. 3 General Election, but the clock is ticking.

Starting Friday, people can go to the Auditor's Office on the second floor of the Carlton County Courthouse and vote absentee. Districts where residents vote by mail and people who have requested absentee ballots should be receiving the first batch of Carlton County ballots in the mail at the end of the month.

The requests for absentee ballots this year is a flood, not a trickle, said Carlton County acting auditor/treasurer Kathy Kortuem, adding that they are seeing 200 to 250 online applications a day plus a stack of mail daily.

In the midst of the Covid-19 pandemic and with influenza season around the corner, she agrees with Minnesota Secretary of State Steve Simon and the Centers for Disease Control and Prevention that voting in advance by mail is a good way to help prevent the spread of either virus.

This election season feels "big," Kortuem said, but she's feeling confident after a smooth primary election, and because other county departments are helping out.

"It's a really busy time of year anyway with the annual audit, the budget and tax collection but we are utilizing extra staff from other departments and spreading the work out," she said. "I'm not exactly calm, but I'm quite happy with our progress."

As of Wednesday, Sept. 16, the auditor's office staff had counted 3,967 absentee ballot applications, plus another 142 online applications (by noon) and about 8 inches of mailed applications that hadn't been opened yet. That's out of just over 21,000 registered voters in the entire county (after the primary).

Anyone who registered to vote absentee or who lives in a voting precinct where voting is by mail, shouldn't worry if they haven't received their ballot for November yet. The ballots just arrived at the auditor's office on Tuesday.

While people can go into the courthouse and vote absentee in person (with a mask on) starting Sept. 18, Kortuem said she expects to send out at least 7,000 absentee and mail-in ballots at the end of the month.

"After that we will send out ballots every few days, and closer to the election we'll send them out daily," the acting auditor said.

Additionally, registered voters who did not already apply for an absentee ballot should have received a card from the Secretary of State's office with instructions for applying.

Kortuem warned that people should not try to vote twice, or they will face legal consequences.

She explained that her office marks "AB" next to the name of voters who apply for an absentee ballot in the roster of voters for each precinct, so election judges will see that if they try to vote in person as well. Additionally, when the in-person and absentee ballots are entered into the state database, both votes will match up to the voter's name.

"As soon as we log in those votes, it will show up," she said, "and you'll be charged with a fraud. The county attorney will follow up on any case."

Voter fraud is unusual, she said, adding that she remembers only one case in the 20 years she's worked in the auditor's office.

It should be fairly easy to request an absentee ballot online.

Go to mnvotes.org and click on "other ways to vote." Then click on "request an absentee ballot online" and it will take you straight to a two-page application form that requires county, city, state and zip code along with the election you want a ballot for (there's only one choice, the 11/03/20 General Election) before taking you to a second page that asks for name, birth date, address, license number and/or the last four digits of your social security number - both are preferred for quickest processing and to help ensure the absentee ballot is accepted later. You must also check the signature box testifying that you qualify to vote in the general election.

Once the application is submitted, you'll get a note saying it's processing and then an email after the information has been "successfully" verified if things go as intended.

"Your application should be processed by your local election official within the next week, after which you can check the status of your application and absentee ballot online at mnvotes.sos.state.mn.us/AbsenteeBallotStatus.aspx," the successful applicant will be advised.

If at first you don't succeed, try again.

Pine Knot News reader Jill Beyer said she went to mnvotes.org and tried to put in her driver's licence number "three different ways" and the system wouldn't let her do it. She has been programming computers since 1978, she said, so it wasn't a matter of not knowing how to work online.

Beyer - who won't vote in person because of health concerns - wanted people to know that they should apply early for an absentee ballot in case things don't work as anticipated.

"I know these are unprecedented times and we're taking unprecedented action," Beyer said. "People are scrambling and I don't want anyone to miss their chance to vote."

Those who want to vote absentee but prefer not to register online can call the county auditor's office at 218-384-9127 or stop by the courthouse during regular business hours.

Returning ballots is as simple as dropping them into the mail (allowing a week for delivery is advised). Although ballots will be accepted via mail after election day, they must be postmarked on or before Nov. 3.

Otherwise people can bring the absentee or mail ballots to the courthouse in Carlton and put them in the drop box by the side entrance door or bring them to the auditor's office on the second floor.

There are a couple of new absentee voting provisions for this year, including:

1. Absentee and mail ballot envelopes do not need to be signed by a witness for this election. The voter must sign.

Anyone who is a registered voter and lives in a mail ballot precinct will automatically be mailed a ballot.

Got questions? Call the county auditor's office at 218-384-9127 or go online to mnvotes.org or sos.state.mn.us/elections-voting.