Lumberjacks are undefeated this year 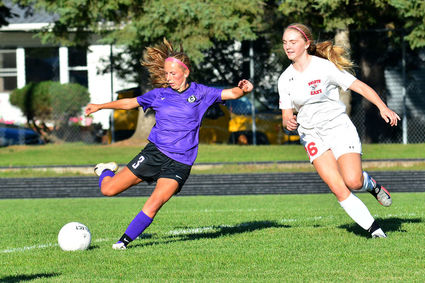 Katie Turner clears the ball from the Lumberjacks zone away from a Duluth East defender during Thursday afternoon's matchup in Cloquet.

Playing at home last Thursday on a perfect day for soccer, the Cloquet girls team stayed undefeated by slipping past Duluth East 3-2.

With temperatures in the mid-60s and a partly cloudy sky, and with the field in great shape, the setting was perfect, minus the fans in the stands due to pandemic restrictions. The Lumberjacks started a bit slow, but eventually got things rolling enough to take the win.

"I thought we were a little tight in the first part of the game," said Cloquet coach Bobbie Turner. "Our positioning wasn't great and we were definitely losing the 50-50 battles. Our goal is to be able to come out clean from the whistle and to maintain our discipline."

Among the issues the Greyhounds presented was a continuing stretching out of the 'Jacks defense made possible by some pinpoint passing which put pressure on the Cloquet back line.

"I think our defense was given a good challenge in this game," Turner said. "East has some speed up top, but our girls got themselves organized and were able to hold their line well."

After the early-game feeling-out period, the Lumberjacks nabbed the momentum with an impressive display of athleticism by Alexa Snesrud and Jillian McCullough at the 17:00 minute mark when McCullough chased down a loose ball and scooted wide before sending a crossing pass high in the air to Snesrud, who jumped high in the air and headed the ball into the top left corner of the East net.

"That goal was just a great combination play after the ball popped out to Jillian - she took it outside and made a great crossing pass to inside the box," Turner said. "The finish by Alexa was impressive because any time you get a piece of the ball before it hits the ground and get it on frame, that's what you want."

Leading by just a goal to start the second half, the Lumberjacks immediately put the pressure on the East net, and in a mad scramble Cloquet's Katie Turner found a loose ball and was promptly fouled on the play, setting up a penalty kick which was converted by Brenna Mattson for a 2-0 lead just a minute into the second half.

"Katie (Turner) was able to grab the ball in traffic and got taken down in the box," Turner said. "Mattson is so composed at the mark and it was nice to be able to capitalize on that foul."

Just two minutes after Cloquet went ahead by two the Greyhounds got a penalty kick of their own which was polished off by Molly Henderson, which cut the gap to 2-1. That goal came in the 45th minute.

The Lumberjacks responded quickly in the 47th minute when Jillian McCullough pounced on a turnover and rammed home a one-timer, making it 3-1 for Cloquet-Carlton.

"That was just a great goal by Jillian," Turner said. "It is every coach's nightmare to turn the ball over so close to your own goal, and to be able to clean that up was really imperative for us. We tell our girls a lot that the difference in a game can be one mistake, so you have to use them when you get the opportunity."

East had an excellent chance to even the score at the 51:00 mark on a breakaway, but Cloquet goalie Gracie Meagher came out and cut the angle down and made a huge save, preserving the lead. The Greyhounds did manage a goal with under five minutes remaining by Chloe Schaeffer, but the Lumberjacks shut them down the rest of the way to pick up a big win at home. 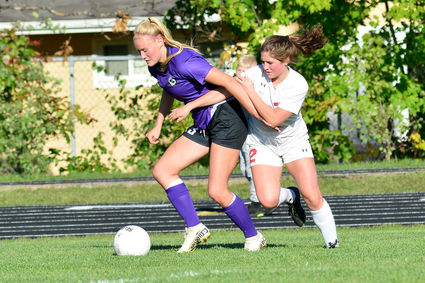 The Lumberjacks Maddie Young battles for the ball against an East defender in the 3-2 win for Cloquet.

"Having the season be so limited geographically due the Covid pandemic gives us a chance to play against a team we normally don't face," Turner said.Duluth East is a Class AA school. "Having two of our first four games of the season against some of our toughest opponents we knew would be a challenge. I think our girls are faring well and continuing to improve every practice and every game, and that is the end goal for us."

Another win in Hibbing

On Tuesday night the Lumberjacks girls improved to 5-0 on the season with a 7-0 thumping of Hibbing-Chisholm. The Lumberjacks got two goals each from Katie Turner and Alexa Snesrud, while Brenna Mattson, Avery Carlson and Kate Conway all added a single tally.

"I was able to give a lot of playing time to some of the girls who are new to the team this year," said Turner. "Two of those players, Avery and Kate, got their first varsity goals on Thursday night."

The Lumberjacks pumped 28 shots on the Bluejackets net.