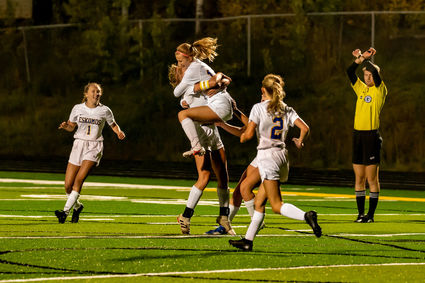 Esko's Ava Korby leaps into a teammates arms as her goal put the team up 1-0 over Hermantown during the second half.

The Esko girls soccer team picked up an impressive win Sept. 17 as they knocked off Hermantown for the second time this season. Two second-half goals helped secure the 2-0 road win.

"I think the girls were much happier with their performance than earlier in the week," said Esko coach Caitlin Lilly. "I thought we controlled the pace for most of the game."

After a scoreless first half, the Eskomos scored 16 minutes into the second half when Ava Korby took a feed from Maya Emanuel making it 1-0 Esko.

"Maya was smart enough to play the way she was facing instead of turning into two defenders - then she dished the ball into space on the corner of the 18-yard box," said Lilly. "Ava was positioned for support perfectly and got her body over the ball and struck a one-timer low on the far side."

The goal seemed to jumpstart the Eskomos, who had to rely on goalie Orie Randall in the first half for a couple of dandy saves.

"We needed to turn the offense up in the second half to convert our possessions into goals," Lilly said. "Hermantown has a dangerous corner kick and took a couple of shots in the first half, but our goalie Orie Randall made some key saves to keep us in the game. She was very confident off her line, turning away any chances and she communicated with our defense the entire game."

Six minutes after Korby's goal, the Eskomos struck again when Avery Kuklinski rammed home a goal on a pass from Mallory Sunnarborg, pushing the lead to 2-0.

"In that second half we dominated in their end," Lilly said. "It all started from our defensive line. Gwen Lilly and Allie Thornton effectively shut down their offense from their positions at center defense and were able to play support as we advanced up the field."

For the game the Eskomos out shot the Hawks 11-6 with Randall picking up the shutout and the win in goal.