Football, volleyball are back while schools struggle with staffing 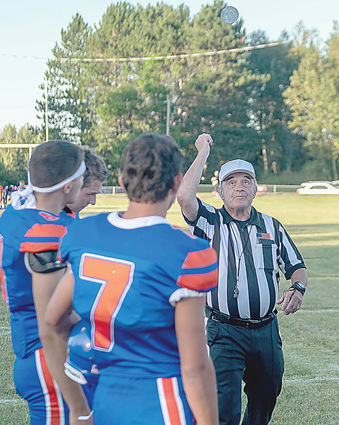 A coin toss opened the first season of Carlton/Wrenshall football last year. A repeat to the successful pairing was in jeopardy for this fall until the state high school league reversed a decision to have football and volleyball seasons in the spring. Teams will play games next month.

The Minnesota State High School League's Board of Directors online meeting Monday was packed with coaches and activities directors across the state. The meeting was held to determine whether or not the MSHSL would reverse its decision of not allowing fall football and volleyball. In the end the board, after hearing numerous comments from speakers, made the decision to allow a shortened season for both sports starting this fall.

The impetus of the vote came following pressure by parent groups such as Let Them Play MN, which began to exert pressure on the league through social media.

"I think it was a big decision to bring back both sports," said Cloquet activity director Paul Riess.

"I listened in to the meeting and there were a lot of questions asked and answered. We do not know what the spring will bring, so this gives our kids a chance to play now."

So what has changed since August? Not much. Riess said it's more about the numbers of positive Covid-19 cases now versus after a winter spent indoors.

Board president Blaine Novak of New York Mills said "today's decision, based on what we currently know and with the unknowns of what spring will bring, is based on the belief that playing now provides us the best opportunity to play a football and volleyball season."

Seasons already started for boys and girls soccer and cross country, girls tennis and girls swimming and diving. Most of those seasons will be wrapping up regularly scheduled games and meets in early October. All teams are waiting on the league board meeting Oct. 1, when members will make decisions about postseason tournaments for all fall sports.

Survey results gathered by the league last week showed that more than three-quarters of member schools supported a return of volleyball and football.

A quick turnaround for idle athletes and coaches will not come easily.

"There will be challenges turning this around in short order," said Esko activities director Chad Stoskopf. "Notably, there will be (fewer) athletes because some have chosen to avoid the exposure risk while others have joined other sports or taken a job during the season. In any case, our coaches will rise to the occasion and we will be prepared to adjust as we move forward."

Both sports will be allowed to return to practice Monday but both will also have shortened seasons. Football will include a six-game regular season with a postseason format to be determined. Since Sept. 14, member schools have had the option of participating in fall training sessions. Volleyball will include an 11-week season with an approved 14 matches. Volleyball competition will begin Oct. 8 with football starting Oct. 9.

Scheduling games will only be one of myriad duties for districts, South Ridge AD Tony DeLeon said.

"It definitely will cause some chaos. We'll just adjust the schedules we had in place by moving some games around and there will be some creative scheduling when it comes to officials, especially later in the season when we get to November," DeLeon said. "Many officials have decided not to officiate, while others already have plans in November. Sixty percent of our officials are over the age of 55, which brings concerns for their health. Transportation for some schools will also be tricky to figure out."

Districts will have to consider the numbers of football players, learning plans, and scheduling bus drivers now that some districts laid off drivers. THey also have to hire workers for the games. "Then add to all that the logistics of hosting games or events," DeLeon said.

Activity directors are not the only ones having to deal with logistics as coaches now have to put together practice schedules, game plans and other things too numerous to mention.

"There will be lots of things to get ready in a very short time," said Cloquet football coach Tom Lenarz. "Usually we have a couple of months to get ready - now we have a week."

As football coaches scramble to pick up the pieces and hand out equipment, area volleyball teams are also feeling the stress of a compressed time frame.

"We are doing some scrambling to get everything in place," said Esko volleyball coach Desi DeLeon. "We expect everything will fall in place by Monday and be ready to roll. Everyone is excited to play."

In Cloquet the volleyball coaches are facing a similar situation, but like other teams, the coaching staff is excited about the chance to finally get on the court.

"We only graduated one senior last year, so we return a lot of depth this year and we are looking forward to getting to play other teams," said Cloquet coach Heidi Anderson. "Our girls love to play volleyball and they understand that we need to be flexible with the day-to-day changes that are happening."

According to a story by Minnesota Public Radio, Kris Ehresman, infectious disease director for the Minnesota Department of Health, said sports have led to 62 outbreaks or clusters. That includes 15 associated with basketball, nine with soccer, nine with hockey, nine with football and six with volleyball. Ehresman said she saw no difference in risk now versus early August when the league decided to wait on these sports.

One of the questions asked during Monday's meeting was what health guidelines will need to be followed by both football and volleyball. The answer is that both sports will be required to follow the Minnesota Health Department guidelines which have already been implemented for other sports that are currently being played such as soccer. Because volleyball is an indoor event, there will be no spectators allowed. Outdoor events, such as football, are allowed a maximum of 250 fans. For soccer, each player submitted a list of six names for home games and a person's name has to be on the list to get inside, whether they pay an entrance fee or not.

"Those are guidelines that we also had to follow for soccer and swimming," said Paul Riess. "So, even though our kids get the opportunity to play, the drawback is that there are spectator limitations."