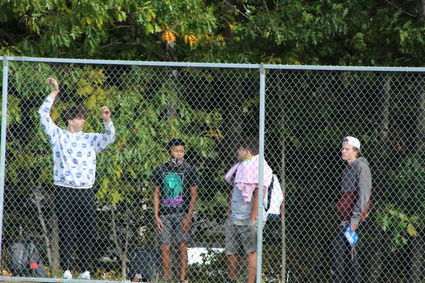 Students who couldn't get into a CEC vs East game watch from outside the fence at Bromberg Field earlier this fall.

The announcement last week about high school football and volleyball set off a chain reaction that saw activity directors and coaches scrambling to try and figure out how they would climb the mountain of tasks ahead of them in just two weeks. ADs spent the past week nailing down game schedules, finding officials, locating game event workers, calling bus companies, all on top of communicating with their coaches.

One of those important tasks is to communicate to the public, and staff, as to what will and what will not be allowed at games.

"There will be no spectators allowed at volleyball matches this year," said Cloquet athletic director Paul Riess in an email to the Pine Knot News. "This was also the case with girls swimming and diving."

While the ADs were busy handling business and game logistics, coaches were rushing to come up with practice plans, looking at previous years' game films, handing out uniforms and equipment while bringing both players and assistant coaches up to speed.

One big difference in the ruling last week is the fact that while volleyball will have no spectators, football will have some fans in the stands. Not nearly as many as usual, though, and those who do get to come in are asked to sit at least 6 feet apart from other family groups (and wear masks, of course).

"Our capacity limit for football is 250 people and, similar to soccer, we will be using a pass list," said Riess. "Players suiting up for a game will be given a certain number of names to put on the list. Only individuals whose names are on the list will be allowed to purchase a ticket to the game and enter the stadium."

The protocols put into place last week will affect all teams in the state, not just Cloquet.

On the bright side, if you aren't close enough to a player to get your name on the list, there's a lot of green space for lawn chairs on the other side of the fence. Just keep your distance from other fans.