It's win some, lose some for Cloquet volleyball 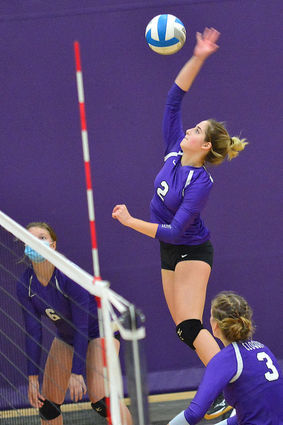 Cloquet's Emerson Rock (2) prepares to spike the ball over the net as the girls take on the Hermantown Hawks Thursday in Cloquet.

The Lumberjacks varsity volleyball team started its season with a loss to Hermantown, winning just one out of four games Thursday, Oct. 8, but they came back strong Tuesday with a 3-1 win over Duluth East.

Geneveve Fonoti (left) and Brenna McClarey block a shot from the Hawks during the first match of the season. McClarey had 16 kills against the Greyhounds Tuesday, and helped lead the Lumberjacks to the non-conference win. Scores in that match were 21-25, 28-26, 25-23, 26-24.