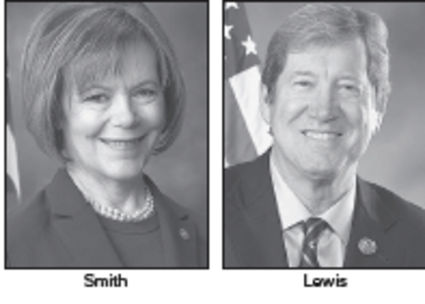 Editor’s note: The following questions and answers were facilitated by the Minnesota Newspaper Association for its member newspapers.

A I am running for re-election to continue to fight for all Minnesotans. The rising cost of health care, especially prescription drugs, is the No. 1 issue that I hear about from Minnesotans, which is why the first thing I did when I arrived in the Senate was take on the big pharmaceutical companies. And it's why I passed into law my bipartisan bill to help lower the cost of insulin.

But this year has been especially challenging. Between the coronavirus pandemic that has shaken the foundation of many Minnesota families and businesses, and the murder of George Floyd right here in Minnesota, we have so much more work to do to build back better and to address the systemic racism in our society.

A In the Senate, I helped pass the CARES Act, a $2.2 trillion stimulus bill that included $1,200 per adult/$500 per child in direct cash payments to individual Americans, enhanced unemployment benefits, the creation of the Paycheck Protection Program. The package also included nearly $340 billion in aid to state and local governments, billions to hospitals and our health care systems, and several other key provisions that helped address the fallout of the economic shutdown.

But more must be done. It's time for Mitch McConnell to quit blocking additional relief and bring up the House-passed HEROES Act for a vote. This would include more direct assistance to individual Americans, businesses, and state and local governments, as well as much-needed aid for the Postal Service.

A I am thankful everyday for the role that our brave service members play in preserving peace and stability around the world. Over the past four years, President Trump has moved our foreign policy in the wrong direction by withdrawing from the Iran nuclear deal, cozying up to dictators, and turning a blind eye to the murder of Jamal Khashoggi and Russia's ongoing interference in our elections. As a result, our credibility on the world stage has been diminished.

A I support expanding access to affordable health care by improving on the Affordable Care Act and by addressing the underlying issues that drive health care costs, such as the exorbitant prices of prescription drugs. I do not support expanding loopholes to make it easier for insurers to sell Americans "plans" that lack many of the consumer protections provided by the ACA like coverage of essential health benefits.

We have heard too many stories of Minnesotans rationing their prescriptions due to the astronomical price tags of many lifesaving medications. This should be unheard of in America. I have a track record of working across the aisle, and one example of this is my bipartisan law that helps lower the price of insulin and brings low-cost insulin products to market.

A We are at an inflection point and the science is clear. We must make big and bold steps to address the climate crisis immediately. I believe the U.S. must be a leader in this fight. In the Senate, I wrote legislation to create a federal clean energy standard and set us up to achieve net-zero emissions from the electric sector by 2050. We must continue to support bills like this to ensure that our grandchildren have a safe planet to live on. I've also fought to protect Lake Superior from cuts to the Great Lakes Restoration Initiative, I've pushed back on the Trump administration's reckless repeal of environmental protections.

A I am proud of the work I've done before being elected to the Senate. I moved to Minnesota and started my own business, became a leader at Planned Parenthood, chief of staff for the mayor of Minneapolis, and then chief of staff for Gov. Mark Dayton. After serving as chief of staff, I was elected lieutenant governor alongside Gov. Dayton.

When a mainstream political party and its standard bearers are pushing to defund the police, it's safe to say that something is dangerously wrong and Minnesotans need a voice that will stand up and fight for them and protect them. Not only will I fund the police and punish those who don't, I stand in favor of putting Minnesota and American jobs first, at the expense of globalist policies of the past (like NAFTA) that shipped jobs overseas and hurt our farmers.

We must hold China accountable for exporting the coronavirus and ensure American corporations stop outsourcing jobs there.

I will also protect the tax cuts I helped enact in the 115th Congress. We must also protect our Constitution and appoint and confirm jurists to our federal courts who will protect the freedom of speech and assembly, the Second Amendment, and protect against radicals who support late-term and even post-birth abortion.

A Between the China travel ban (which Democrats opposed and decried as xenophobic) and actions taken to shore up medical supplies and resources to "flatten the curve," the administration's approach has proven effective.

Having seen a drastic reduction in cases and mortality rates, it's time to fully reopen our economy. I was all in on "15 days to slow the spread" and its initial extension so that our health care infrastructure could shore up and "flatten the curve." I have been proposing since April that we lift once and for all this economic lockdown that has plagued and derailed what had previously been the best economy on record, thanks to the tax cuts I helped pass in Congress.

Americans indeed need more relief from the fallout surrounding Covid and the lockdown.

A The Trump Doctrine of "America First" is precisely what the American people have been looking for in the post-Cold War era. We protect our allies abroad while disentangling our nation from foreign conflicts that have no direct national security threat to the United States.

Trump won in large part by running against globalism and nation building. He has fulfilled that promise and I support that. It's the difference between a republic and an empire.

A I support association health plans which enable small businesses and the self-employed to compete with larger groups by forming their own pools. I also am proud of my efforts in Congress to reform the ACA and lower premiums, deductibles, and drug costs.

We now have two competing visions of what direction health care in America should take. A market-based system of private medicine with a safety net, or a heedless slide into a single-payer government-run system.

A Under President Trump, for the first time, the United States of America is a net energy exporter. In order to promote homegrown energy, we need only continue the pro-growth, pro-energy policies promoted by the president and myself when I served in the 115th Congress. I would hate to see this progress reversed because we gave in to the short-sighted whims of radicals pushing proposals like the Green New Deal.

I don't believe in hamstringing our economy and putting us at a competitive disadvantage relative to other nations who have no intention of meaningfully reducing emissions. That's not to say our nation's energy policy should be heedless of concern pertaining to emissions and the environment. We need to continue to foster the surge we've seen in clean fracking.

I have been a vocal and forceful advocate for the Enbridge Line 3 replacement pipeline which would create 8,600 jobs in Minnesota and generate more than $19 million in local property tax revenue. And yet, Minnesota Democrats throw hurdle after hurdle in its way, which is surprising considering the pipeline is so old and dilapidated that it can only operate at 50-percent capacity. Protecting our land, water, and air and supporting our job creators and businesses are not mutually exclusive.

Take the Minnesota Iron Range for example. Some of the strongest environmentalists I know are also some of the most vocal proponents of new copper and nickel mining. We must lend more trust to businesses and individuals to be good stewards of the land.

A Senator Smith and I come from very different backgrounds and walks of life. I spent a lot of my early years working for the family business. We owned a machine shop and I spent a lot of time on the road selling automotive aftermarket parts. When my dad retired I took over the family business, later going into broadcasting and enjoying a long and successful career as a radio host discussing public affairs and hearing folks' concerns each and every day ....

The 115th Congress, of which I was a part, was one of the most productive sessions of Congress in our nation's history. I was proud to have helped pass historic tax cuts through the Tax Cuts and Jobs Act. I authored and sponsored landmark bipartisan juvenile justice reform, and I co-sponsored and passed a bill providing historic levels of support to career and technical education.

Too many young folks (and their parents) are going into debt to fund four-year degrees that sometimes provide little utility. Growing the middle class means we need to provide more resources and encourage people to go into farming and the trades, and ensure they are able to thrive doing so.