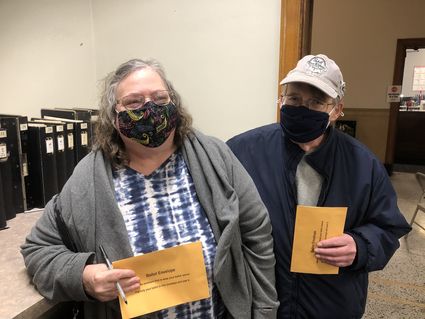 With less than two weeks to go until the Nov. 3 election, almost half of the registered voters in Carlton County have received mail or absentee ballots.

As of Friday, Oct. 16, the Carlton County Auditor's office had mailed out 10,648 ballots to voters who had requested absentee ballots or who live in a precinct that votes by mail - out of a total of 21,424 registered voters after the primary. Of those, nearly 6,000 had been returned.

It's a year like none other, said acting county auditor/treasurer Kathy Kortuem of the flood of early voting across the county, the state and the nation.

Happily, unlike some southern states, the lines here in Carlton County have not required people to bring snacks and lawn chairs while waiting hours to vote. There are times when there are up to about eight people in line, and other times when there is no one in line, but it's been very manageable, the acting auditor said.

Kortuem figured they have seen an average of 50 residents a day since Sept. 18 coming to the office to vote absentee there. On top of that, people are bringing about 100 absentee and mail ballots to the dropbox by the downstairs entrance daily.

When asked how many mail and absentee ballots are arriving in the mail every day, she holds her hands about 3 feet apart, indicating the space that the upright ballot envelopes fill in a mail tray. "There's just so much interest out there," Kortuem said. "There's always a lot of interest in the presidential elections, but this one seems [extreme]."

In terms of threats at the polling stations on Election Day, Kortuem is more worried about keeping people safe from the coronavirus - masks and social distancing are mandatory, and voting stations are sanitized between voters - than actual conflicts.

"We had one person who was a little more upset than we normally deal with, but his reactions were still fairly subdued," Kortuem said. "We haven't seen much [confrontational behaviors], and I hope it stays that way."

She said what people are referring to as "poll watchers" are not allowed in Minnesota. The state does allow "challengers" to be appointed by a political party prior to Election Day. Those people are allowed to challenge if they have personal knowledge of a voter, but they are not allowed to speak to voters, only to the election judges.

"They can't interact with voters at all," Kortuem said, explaining that only certain things can be challenged. "The election judge is a go-between."

The county also seems to have an adequate number of election judges, Kortuem said.

"We've had a lot of interest after the fact, but those people aren't trained. We can do emergency training if we need to, but we haven't heard from the precincts that it will be an issue for them yet."

Kortuem disputed any allegations that the county has closed polling places without telling people. This year Carlton County has a total of 19 mail ballot precincts and 19 polling places, with six in the city of Cloquet.

"No polling places in Carlton County have been closed," she said. "Four precincts did change to mail balloting, but all registered voters were mailed postcards announcing that change. Newspaper ads were also taken out to announce the change."

The city/township makes that decision, not the county, she said. Before the first election at which mail balloting will be used or discontinued, notice must be given by one or more of the following means: publication in a general circulation newspaper, posting a notice at public locations within the precinct, mailed notices to registered voters, and/or information through the media or at public meeting.

The lines to vote in person may be shorter in November - like they were for the August primary, when the number of people voting by mail or absentee ballot in Carlton County outnumbered those who voted in person on Election Day.

For many, it was an issue of avoiding crowds that might spread Covid-19, for others it was more of a convenience.

Pam and John Hendrickson had planned to vote at the polls on Election Day, but decided they didn't want to get cold feet ... literally.

"We didn't want to deal with lines, especially if we had to stand outside," John said.

So the Thomson Township couple headed to the cozy courthouse on a snowy Tuesday and got their absentee ballot application and then their absentee ballot, sitting at a table outside the auditor's office to fill out each form. It didn't take long, they said, with John adding that they were better informed about the candidates thanks to the free Pine Knot News voter guide that was delivered to their home earlier this month.

"There's usually a lot of people that run for office that we don't know, and it's hard to find more information about them, even online," he said, adding that he'd like to encourage everyone to vote.

Kortuem echoed that sentiment, even if the higher-than-ever early voting numbers have added a lot of work for her office.

"It's hard to describe how many touches each ballot has from the time of application until we put them into the machine [to tally the votes]," she said.

Once a voter fills out an absentee ballot application online or in person, it then has to be entered into the state data system. Once a ballot is mailed out and returned to the auditor's office, the outer envelope has to be opened, date stamped and filed in the correct precinct in alphabetical order. Two different people have to look at an absentee ballot and the original application, to verify everything is in order. Then it again has to be entered in the state database, so voters can track their ballots online.

The biggest mistake people seem to make is forgetting to sign the white signature envelope for the ballot, she said, including their social security or driver's license number, whichever one they used to apply for the ballot. When people use the wrong number, her staff have to verify the number, which sometimes means calling or emailing the voter. Other times, if a ballot is filled out incorrectly, they have to mail a fresh one to the voter, something they still have time to do, for now.

Wondering how they can possibly count all those mail ballots come Election Day?

Don't worry. Kortuem said they could have begun the process of counting early ballots on Tuesday, Oct. 20, according to the state. She plans to start next week probably, noting that they wanted to wait until even more ballots come in, because it will be more efficient to process more votes at once.

She encouraged voters who haven't already applied to vote early to do so as soon as possible, because there's less than two weeks until Election Day. And while the state of Minnesota is accepting ballots that are postmarked on or before Nov. 3 for an additional seven days after the election, Kortuem doesn't advise gambling that your ballot will get there on time. Just because it can happen, doesn't mean it will. 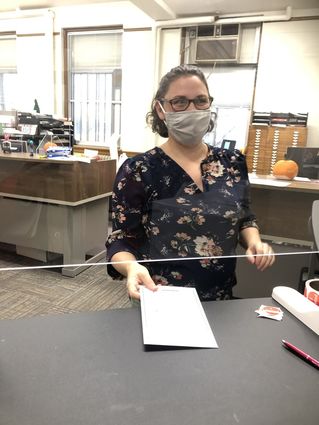 Carlton County Auditor's Office "jack of all trades" Melainy Nickila accepts an absentee ballot from a voter from behind a plexiglass shield Tuesday. "I am never bored here," Nickila said.

"We will mail ballots out on Monday, Nov. 2, but the post office is recommending that voters allow six days for their ballot to reach them, so everyone who would like to use absentee/early voting should request a ballot as soon as possible," Kortuem said.

The Carlton County Auditor's Office is open for voting Monday through Friday from 8 a.m.-4 p.m., plus Saturday, Oct. 31, from 10 a.m.-3 p.m. and Monday, Nov. 2, from 8 a.m.-5 p.m. On Election Day, Nov. 3, voters who live in mail-ballot precincts can vote at the courthouse 8 a.m.-8 p.m. if they have not already mailed in their ballots. Those who live in precincts with a polling place can drop off absentee ballots at the courthouse until 3 p.m. on Election Day, but otherwise must vote at their polling place.