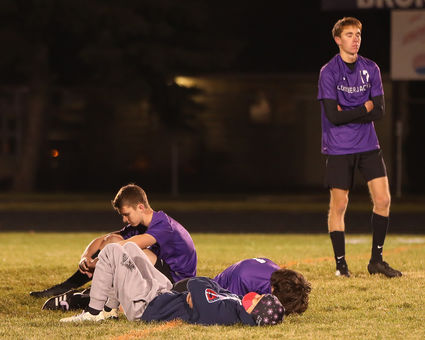 The Cloquet-Esko-Carlton boys soccer team was stunned in the second round of the Section 7A boys soccer tournament Thursday night, losing 1-0 to Duluth Denfeld, a team they beat 11-0 a month ago.

"Denfeld did not change much in terms of how they played us the first time," said CEC head coach Dave Bergan. "It was just a battle, and hats off to them."

Playing at Cloquet High School in temperatures that were beyond frigid, the game was tight throughout and the Lumberjacks had chances, but they were unable to finish. Unlike the last time the two teams met, the Hunters' star player, Keegan Chastey, was healthy and played most of the game, along with at least one other starter who sat the second half a month ago.

But the Hunters were also very hungry this time.

"They made sure to have numbers up when they were on defense," said Bergan. "They were double- and triple-teaming our forwards when they could, but we still were able to find scoring chances. Our outside midfielders were doing an incredible job exposing them and being able to put the ball in dangerous spots."

That exposure led to several first-half scoring chances for CEC, but unfortunately the shots they did get were either shot over the net, wide, hit a post or were stopped by the Hunters goalie.

"The first half we kept possession and had quite a few quality chances. We had three off the post and we just missed a few breakaways," said Bergan. "The weather made the field slick but it just was not our day; we had given ourselves plenty of chances to score and in the end we did not find the net. We had always found a way to find the net, and for the first time all season we did not finish. Sometimes the game can be cruel that way, but you learn from it and grow from it."

As the game wore on, the Hunters seemed to gain confidence and they finally struck in the 73rd minute on a goal that bounced off the post and then found its way into the CEC net.

"There was nothing we could do about it," Bergan said. "Defensively, we were in position and the ball hit the post and went in. It was just an unlucky bounce for us."

Owen Wilcox got the game-winning goal for the Hunters on an assist from Simon Davidson.

After the Wilcox goal, the 'Jacks amped up their offensive attack even further, but were unable to finish as their undefeated season came to an end in the Section 7A quarterfinal.

"It has been my pleasure and honor to coach this team. It was definitely a heartbreaker knowing that we were able to dictate play on the field but just not get the ball in the net," Bergan said. "They have worked incredibly hard for this season and knowing they had the talent and drive made it just a bit harder to walk off the field without the win."

The Lumberjacks finished the season with a 12-1 record. 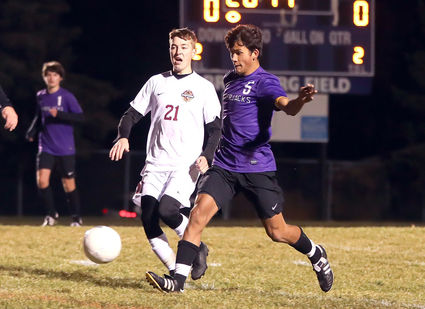 Cloquet-Esko-Carlton senior Logan Dushkin sends a pass ahead while being pursued by Duluth Denfeld's Owen Wilcox during Thursday night's Section 7A quarterfinal match on Bromberg Field.

"Having 12 seniors on the team who are all incredible young men and soccer players has been a treat to coach," Bergan said. "My heart goes out to them, they have earned the respect of the soccer community in the Northland and put CEC back on the map for soccer. I congratulate them on the historic season and wish them well in the future."

Despite the loss, Bergan knows that this CEC team was one of the best in school history.

"I stand by knowing that - despite coming up short - this has been the best team CEC has been able to put on the pitch. We set the bar high and they not only reached it, but took it to the next level each and every day," Bergan said. "At the start of the season we did not know what was going to happen, so they took each day and enjoyed the game they loved. They had set goals and it was the coaching staff's job to help them get there."